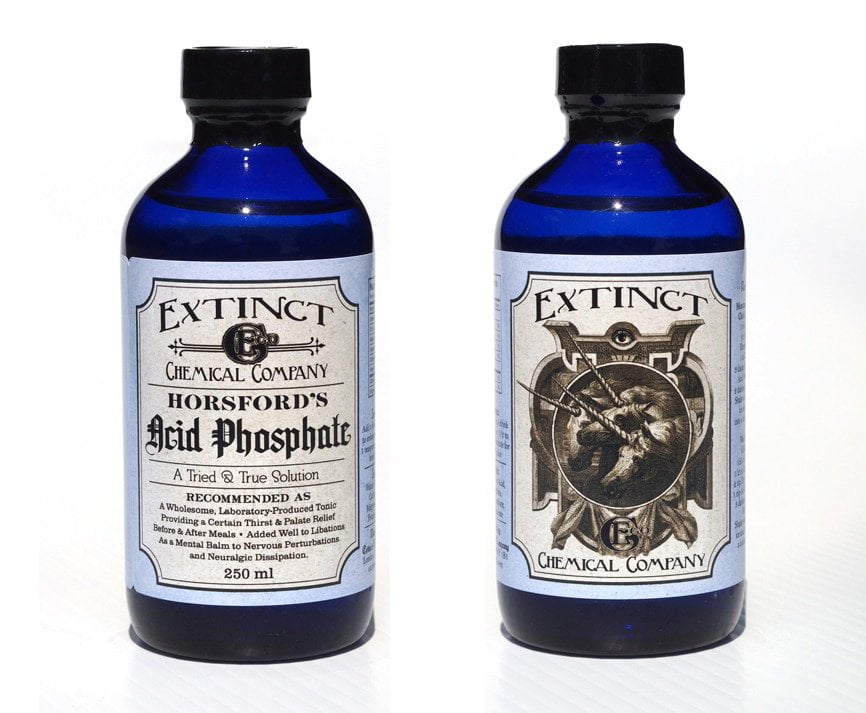 The most popular drink in the world was once made using Acid Phosphate. Today, Coca-Cola no longer uses this unique ingredient, instead, they have simplified their formulation by using phosphoric acid, which still makes it a phosphated soda, but not the classic version. The “phosphate drink” was the most popular drink at soda fountains for over 70 years, but once Acid Phosphate disappeared the real phosphated soda disappeared too. Happily, Acid Phosphate is once again available and now you can taste the ingredient that launched some of the most popular beverages in the world.

Acid Phosphate was created in 1868 as an invigorating health tonic, pretty much like every other patent medicine created during the period. However, unlike many of the “magic tonics”, Acid Phosphate was actually useful and became a key ingredient in soda drinks because of its pleasant acidity.

Prior to mass transportation and refrigeration, ingredients like lemons and limes were hard to come by outside the southern states and port cities like New York. To compensate, soda fountain operators would purchase lemon oil, which was shelf-stable and mix it with Acid Phosphate and soda to create the immensely popular lemon soda. Acid Phosphate also enhanced the flavour of drinks because it included a small quantity of various salts (potassium, calcium and magnesium).

Why not citric acid instead of Acid Phosphate?

At the time, the process for making citric acid involved juicing tens of thousands of lemons and limes and “processing” them to extract the citric acid. Unfortunately, the vats used for this process used lead, which was a serious health hazard. Pharmacists recognized the hazards of lead, so they avoided using anything that was contaminated with this heavy metal. Acid Phosphate was a safe, convenient alternative.

Today, citric acid is the most common acidulent in beverages. Whether it’s from lemons, limes or the pure chemical compound the majority of drinks that use citric acid have that distinctive citric tang. However, the abundance of citric acid has almost created a monopoly on the sour flavour. Any drink that uses lemon or lime juice is inherently going to taste lemon or lime-ish. That’s not necessarily a bad thing, but the world of drinks, and especially cocktails which are in a period of rapid development, are being crafted with different types of bitters and sweeteners (agave, palm, cane, etc.) while the sour aspect is mostly ignored. Wouldn’t it be nice to have something different than lemon or lime to acidify a drink?

The best way to describe the flavour of Acid Phosphate is to call it a “blank palate” sour flavour. It lacks any particular flavour compounds, like citrus oils, and presents a more pure sour flavour. Basically, it won’t influence the flavour of a drink, other than to represent the sour taste. For creative bartenders and mixologists, this opens up a whole new world of experimentation.

People fear the unknown, and the term Acid Phosphate seems to invoke a cautious response in some. The reality is that Acid Phosphate isn’t really much different than vinegar. This ubiquitous ingredient found in pickles, balsamic vinegar and shrubs, is just a dilute solution of acetic acid, usually around 5%, but can be as high as 18% for pickling vinegar. Acid Phosphate contains approximately 2% free phosphoric acid.

Like lemon and lime juice (citric acid) and vinegar (acetic acid), Acid Phosphate can be used to add a sour flavour to food or drinks. It can be used by itself, or in combination with citrus juice to enhance the sourness of a drink. It is particularly useful when used in dashes to balance the sweetness of a drink, while a teaspoon will equal roughly the same sour levels as the juice from a medium-sized lime. Anywhere you need to employ a sour flavour, Acid Phosphate can be used.

No, this is not true. Acid Phosphate is actually partially neutralized phosphoric acid. The salts of calcium, magnesium and potassium (notice no sodium) are mixed with the phosphoric acid, which reduces the acidity and buffers the pH of the liquid. The process for making it is very similar to that childhood favourite combination of baking soda and vinegar. Once the reactions have finished, the end product has a pH between 2.2 and 2.4, whereas freshly squeezed lime juice has a pH of 1.9. Even with the higher pH, Acid Phosphate has a more intense sour, which has to do with the chemistry of phosphoric acid and the associated phosphate salts.

Can’t any acid be used to make a phosphate soda?

No. The point of a phosphate is that it uses Acid Phosphate. Since the demise of the soda fountain, the term “phosphate” has become fairly generic. Many of the soda fountains today apply the term “phosphate” to any soda they make. Really, that’s the same as calling anything in a Martini glass a Martini. A legitimate phosphate is made with Acid Phosphate.

Don’t believe everything you read on the Internet. Phosphates are extremely important to bone structure and ironically the high levels of phosphates in bones were the reason Acid Phosphate was invented. The actual salts in the Acid Phosphate are commonly found in things like sports drinks, antacids, and mineral supplements. As Oscar Wilde said “everything in moderation, including moderation”.

Acid Phosphate is an old ingredient with a ton of new potential. You can order bottles through Art of Drink Or better yet you can grab a Soda Kit that includes a bottle of Acid Phosphate, Lactart and a copy of Fix the Pumps. I’ll have more to say on Lactart shortly, but it’s basically another food acid that was popular at soda fountains, which you can read about in Fix the Pumps. If you have questions please feel free to email me [email protected]