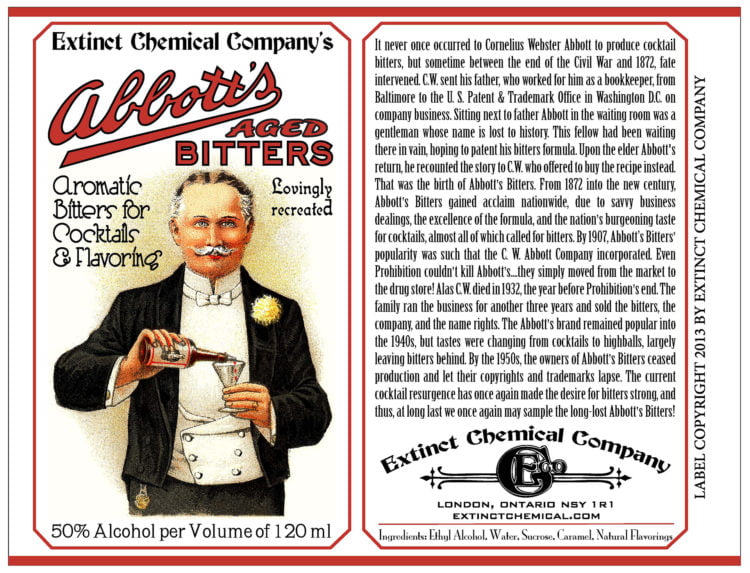 Back in 2009, I stumbled upon a bitters recipe with two Abbott signatories on the document. Since Abbott’s was one of the most popular bitters before prohibition, it required further investigation. And that led me to present all this research at Tales of the Cocktail 2016. And now here it is for you.

My original goal was to recreate the bitters and hock them to lusty bitter enthusiasts. However, several hurdles made that problematic. One ingredient, canella alba, is endangered in most locations. A company “never to be named” was attempting to protect their modern version of Abbott’s as the one-and-only, and claimed a trademark to the Abbott’s Bitter name. They tried to enforce it, by lobbing cease and desist letters in my direction. I believe the Trademark Office declined their name application but approved the original Abbott’s image. And finally, getting approval in Canada for the bitters was bureaucratically tricky. There is a taste element to the approval process, and this formula was deemed to be not bitter enough. And really, Abbott’s are not that bitter, but as I have always said based on years of research, aromatic bitters are not about the bitterness, they are about the AROMATICS.

Here are some of the first posts on Abbott’s, which will refresh your memory if needed.

Since the presentation below doesn’t have an audio track, there are a few important notes:

There are lots of other research details, and over-time, I may continue to update this post with all the research I’ve stumbled upon. But for now, this is a good start.

Tales of the Cocktail 2016 PowerPoint Presentation

This is the patent with Job & Ruth Abbott as signatories.

If you have any questions, please feel free to send me a tweet @dsoneil, and I’ll see if I have an answer.