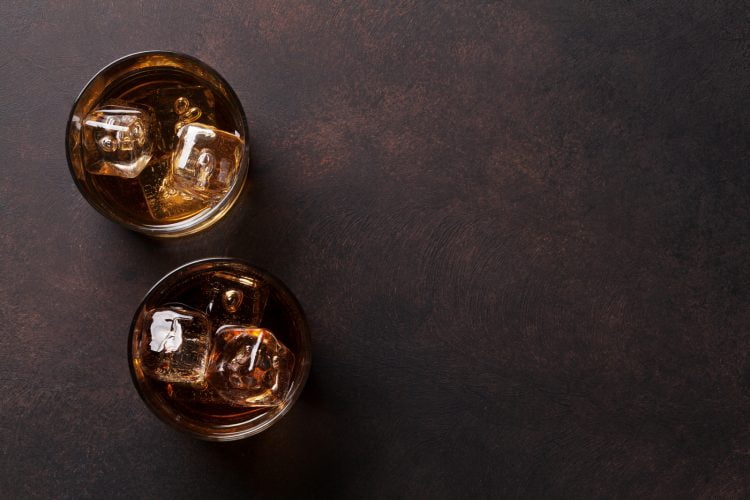 Much like the Rum & Coke, the Jack Daniel’s & Coke is simple, though oddly delicious drink. Though it is often considered lowbrow, it is effectively the same as the aforementioned Rum & Coke or Cuba Libre, minus the squeeze of lime juice. The simplicity of ordering this two ingredient drink is one of the reasons it is so popular. Simple drink orders make bartenders happy when the bar is busy. Plus, if you are not into cocktails or wine this is a perfectly acceptable drink.

The recipe is simply the two ingredients in a ratio that you enjoy. If you like stronger drinks you might prefer 1½ oz of Jack to 3 oz of Coke which you would order a “Jack & Coke short”. If you are young and don’t like the taste of alcohol you might use 8 oz Coca-Cola, but with that much liquid and ice, you’ll be drinking it out of a pint glass, so order it “long”.

Putting some soda in the bottom of the glass helps mix the whisky without making the cola go flat. The carbonation will cause a mixing action so no stirring necessary.


Amount Per Serving:Calories: 155Total Fat: 0gSodium: 6mgCarbohydrates: 13gSugar: 13gProtein: 0g
Generally, you can get one at almost every bar, though some higher-end and fine dining locations may not stock Jack Daniels Old No. 7, though almost every restaurant has Coca-Cola or Pepsi—which makes a fine drink too! If there is no Jack No. 7, then try bourbon and coke. Four Roses and Old Forester make a fine highball and you may find that you prefer the smoother bourbons with their vanilla sweet flavour profile compared to more charcoal forward flavour of Jack Daniels.  If you are unsure, they may have Gentleman Jack which would give your drink some extra mellow.

Beyond the Tenessee whisky and bourbon and coke, other whisky combinations work as well. Crown & Coke is popular

Can you make it with Diet Coke? Sure, it is your drink and you are paying for it, so always drink what you want. You’ll enjoy life more when you do that.

I’ve heard that diet soda makes you get drunk faster, is it true? Slightly true, but not as intense as people think. On a completely empty stomach, you with get about 1/6th more intoxicated per drink. That’s not a big deal considering wine and beer have varying ranges of alcohol, some common beers have 3.2% while others go to 6% and wine varies from 11% to 15%. Those make a larger difference when you drink than calorie free soda.

If you are curious as to why Coca-Cola tastes good, part of it is excellent marketing, but early formulations are complex and interesting. Here is Coca-Cola’s ingredient list. And if you really like this drink, try it on a steak.