The inevitable has happened. Tempus Fugit Spirits have sent me a cease and desist letter asking me to stop using the Abbott’s Bitters name as they feel they have a legitimate trademark on it. I disagree, and I will explain why below. Though the letter is polite, like all cease and desists, it is implied that it will get much less pleasant if I ignore them. Consider this the first response. And it should be noted that legal arguments are complex and this post isn’t an attempt to deal with all the issues, but instead, it is being done to shine a light on something important that the cocktail community should be made aware.

Let me tell you a story. When I was a young kid in grade school, the other kids liked to pick on me. Young boys, like chickens, have a pecking order and to rise into the upper echelon of playground superiority, one must display to the other kids that they are strong. So they pick a smaller opponent and attempt to cajole, embarrass, and verbally abuse them, or if need be, wail on them.

Alas, I never liked being picked on and wouldn’t submit to the threats, I’d just hold my ground. This would escalate the threats of violence. Then they’d start pushing my shoulders with the flats of their palms. For some evolutionary reason, this was a show of force. Then a circle of kids formed and started chanting &quot;fight, fight, fight&quot;. Then I punched him in the face.

By this point, the fight had technically started. For some reason bullies don’t want to fight, they just want to dominate. I, on the other hand, just wanted to be left alone without giving any ground, however just standing there isn’t holding one’s ground, it could be confused with paralyzing fear, so I’d punch.

I learned quickly that as a lightweight you won’t last long fighting a heavyweight, so you need to punch first and punch hard. These weren’t sucker punches; we were squared off and ready to fight, I just went first because the other kids would be apprehensive. They started something and they probably didn’t think it was going to get this far, but it did.

A punch to the face is a rather stunning experience and it does a great job of pissing the opponent off. The anger generated from said punch seemed to remove any apprehension the opponent had about fighting and I usually ended up getting tackled and rolled around in the dirt. Luckily, by the time we reached that point the schoolyard teachers have moved in to break up the fight.

The best part was that punch usually stopped the kid from picking on me. They knew that if they wanted to fight it was going to hurt, so they’d pick on some less feisty opponent, and I lived in relative peace until some other kid decided to rearrange the pecking order. They received the same treatment, and I eventually earned a certain level of respect.

When I received this cease and desist letter, that feeling I had in the playground returned. I don’t like when people try to force me to do something that isn’t justified. My immediate response is to plant both of my feet firmly into the ground, and if necessary, push back and not let them play their little games. And that is what I am going to do.

Here is a copy of the letter sent by Tempus Fugit, and kudos to Mr. Troia for being polite and personable. Legal stuff, involving potential lawsuits, can be a difficult situation and being polite is always appreciated. However, when you file for a trademark on a very public topic you will inevitably irritate many people whether your letters are cordial or not. This is a case of “live by the sword, die by the sword”. Mr. Troia, having taken it upon himself to register the mark, knew one day he would have to face the community when he attempted to protect the trademark, as you must according to the law.

Abbott’s Bitters have been talked about by bartenders and cocktail geeks for well over a decade, going all the way back to the days of the Drinkboy.com forums. Many people have sought the original Abbott’s recipe in many different ways and attempted to recreate it. This, I believe, has put the Abbott’s Bitters name firmly in the public domain.

However, Tempus Fugit saw an opportunity to trademark Abbott’s name and image, even though they did not have a product to sell. If you get the trademark, then you can put anything in the bottle. I doubt Tempus Fugit would have ever had any interest in the product unless we, as a community, were talking about Abbott’s Bitters publicly.

If you think trademarking the Abbott’s name is a bit crass, you should be surprised by the fact that they have filed with the USPTO to have the original Abbott’s label trademarked as well. The Abbott’s “pouring man” logo is an image that was created before 1923 and is legally in the public domain. It was created and trademarked by the C.W. Abbott Company, which ceased to exist sometime in the 1940s and unprotected images created prior to 1923 no longer have copyright protection and have become part of the public domain. 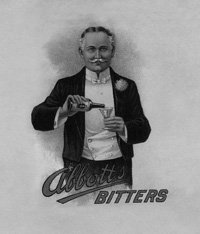 Here is a link to the trademark application with the supplied specimen: Abbott’s Bitters Case Id: 85538923.

This “trademarked” image looks like Tempus Fugit simply copied the public domain image of the C.W. Abbott Company and claimed it as their own. I have a problem with this and so should you.

The Supplemental register is where potential trademarks go to earn “secondary meaning”. That is to say that the name is currently too vague to be recognizable, however with enough use (e.g. marketing and sales) it may acquire secondary meaning and the name becomes connected with that product (e.g. I say Abbott’s, you respond with bitters). The Trademark Office requires the mark be on the Supplemental list for five years before it can be considered for the Principal register.

Also, the Supplemental register cannot be used to just hold a mark for five years; there needs to be sales and marketing. To date, I have yet to see any sales of the Tempus Fugit Abbott’s Bitters.

The good thing for me is that the Supplemental register provides no evidence of trademark rights in a court proceeding. That means Tempus Fugit needs to prove in court that they have given the secondary name meaning. If the trademarked phrase were on the Principal register I would have a more difficult time. The Abbott’s image trademark is easier to defeat because it is a public domain image. The point is, being on the Supplemental register doesn’t guarantee Tempus Fugit trademark status and a court can invalidate the trademark application if it sees fit.

Is it reasonable that one company should be able to single-handedly control the history of a once revered product because they filed a couple of weak trademark applications based on the work and effort of the cocktail community?

Since I started writing Art of Drink in 2005 I haven’t asked for much, if anything, from the cocktail community. In this case, I think we need to do something. The easiest thing to do is share this post on Facebook or Twitter. The best thing to do is send an email to John Troia at Tempus Fugit ([email protected]) detailing your concerns about the trademark. Please feel free to cc me at [email protected].

When I was deciding on the price to charge for my Abbott’s Bitters I factored in the potential for legal difficulties from Tempus Fugit, so if you want to show your support you can pre-order/purchase a bottle of Abbott’s Bitters or the Abbott’s Kit (Abbott’s plus a bottle of Acid Phosphate and Lactart and a PDF copy of Fix the Pumps). The bitters will ship in June.

Oh ya, one other thing. As most of you know, I am based in Canada. The Abbott’s Bitters I produced were made in Canada, packaged, sold and shipped from here. There is currently no presence for my product in the US and probably not for the foreseeable future due to the legal concerns. Tempus Fugit does not have a trademark for Abbott’s Bitters in Canada. Though Canada is often called America Junior or America’s Hat (tongue firmly planted in cheek statement), I assure you that we are not American, as can be seen by our restrictive gun laws and socialized health care system.

Having everything done in Canada was intentional and is a legal firewall to protect my interests. I’m busy raising two young kids, and I don’t need the stress of expensive lawsuits interfering with my life.

There is an element of dejavu in this trademark dispute because when Abbott’s Bitters was originally introduced to the market in the 1870s, it was released as Abbott’s Angostura Bitters and they were promptly served legal papers by the Angostura company. It seems fitting that I should suffer the same fate. Maybe it is a sign…

And if you haven’t watched the slidecast on my Abbott’s research, you can find it here: Abbott’s Bitters Research

Update (2:06 PM): Concerning this Abbott’s trademark dispute, I am of the opinion that anyone should be allowed to recreate an Abbott’s Bitters recipe. That means Tempus Fugit Spirits version along with my version and Bob’s Bitters version can all co-exist peacefully. It is a known fact that most cocktail geeks will end up buying all three anyway, I included.