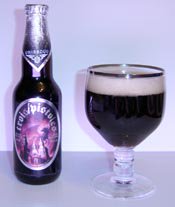 When you say beer, most people think lagers like Molson Canadian, Budweiser, or Heineken. Even if a person thinks ale, they’ll be thinking of a pale ales or amber ales. But there is so much more the beer world has to offer. There is of course the stout category which most people have tried, but there is also a very impressive category dealing with beers from Belgium. Actually, there are number of categories like lambics and Trappist beers, like Chimay. I was recently introduced to a number of beers that I haven’t had the opportunity to try before. One of them was Chimay Grande Reserve, but because availability is unpredictable, I sought out something similar and found Trois Pistoles from Unibroue.

About a month ago I went to a beer tasting with a group from the restaurant I work at. Now I’ve tasted lots of beers, but the world is a big place and for many of my younger years I spent time wallowing in big brew lager land. For the most part I was familiar with lagers, ales, amber ales, porters, lambics and stouts, but there were a couple of beers styles I wasn’t overly familiar with. The Trappist / Abbey ales were one category that for the most part escaped me.

The Abbey Ales are strong beers that have been brewed for hundreds of years. Beer has an interesting history, and one day I’ll write something on the big picture, but here’s a brief look at why Monks brewed beer in the Middle Ages. Back before Louis Pasture discovered “pasteurization” the drinking water of most cities was of pathetically low quality. Raw sewage was often dumped in the streets, which contaminated the water supply with a multitude of diseases like amoebic dysentery, Weil’s disease, hepatitis and other not so fun bacterial infections. The arrival of the Black Death probably didn’t help, even though Black Plague was spread by fleas. With the water supply in such poor shape, people often looked for alternatives to a glass of brown water. Over time people noticed that those who drank beer didn’t get as sick as often. Plus, alcohol with its spirit-lifting qualities wasn’t hard medicine to take, so people drank more beer because it was a healthier alternative than the water.

Monks, and Trappist Monks in particular are required to live off their own resources. In the Middle Ages the Monks brewed beer as a way of using up excess grains and creating a safe drinking supply. You see, to make beer you need to make a mash to bring out some fermentable sugars, from the grain, and that requires boiling water. When you boil water you pretty much sterilize it in the process making it safe to drink. So, beer made good sense in a time when drinking a cup of water could kill you. Now that the world’s water supplies are safer, Monks brew beer to sell and use the proceeds for charitable causes.

These Abbey / Trappist brews are generally high in alcohol, 7% up to 11%, sometimes more. They are also darker in colour and are bottles with on the lees (yeast). Because of the higher alcohol content and the yeast in the bottle, these beers can be aged. For the most part they improve with age and approach port in flavour after five or more years.

One of the most unique brewers in Canada is Unibroue, which is located in the province of Quebec. They make a range of beers that are styled after Abbey beers. They have a number of beers including Trois Pistoles that is a strong ale, dark ale.

Trois Pistoles pours a deep dark brown colour which looks almost black in the glass. The head is light beige and very fine bubbles. The aroma is fruity with yeast and malt. It doesn’t smell like a Christmas cake, but has a unique nose that is very appealing. Even my wife thinks it smell good, which is high praise. The Trois Pistoles is sweet and malty when you first taste it and it doesn’t have a lot of hop bitterness. The flavour has dark fruits with yeasty notes. The finish is slightly spicy, with a little citrus and can linger on the palate for a while. The carbonation is really nice because the beer is bottle condition, so the bubbles are closer to champagne then they are to Coor Light. Now the beer is 9% ABV so some people notice an alcoholic flavour, which I don’t.

The people at Beer Advocate rate Trois Pistoles as a 90. The funny thing is that they rate Chimay Grande Reserve (Blue Cap) as a 90 also. For those that don’t know, Chimay Blue has kind of a cult following and trying to get it can be difficult because people snap it up as soon as it hits the store shelves. But if you can find Trois Pistoles, I highly recommend trying it if you are interested in beers with a lot of flavour. But if you are scared of dark beers, because you tried Guinness and it was too bitter, don’t worry, these beers aren’t heavy on the hops and burnt malt so they may appeal to you.