When you work behind a bar, you’ll get the occasional odd request. Sometimes it for some bizarre drink, other times it for an odd ingredient and then there is the request for items that usually are not stocked in a typical bar, like root beer. Most bars have a limited supply of non-alcoholic carbonated beverages, and those are typically Coke, Diet Coke, Sprite, Ginger Ale, Tonic Water, Club Soda or their equivalent Pepsico products. So what’s a bartender to do when someone wants vodka and root beer? Well, you have two options, say you don’t stock that or make a Bartenders Root Beer.

Now I must admit that I like the flavour of a good root beer. It reminds me of when I was a kid and my parents would take me to the A&W Drive-In restaurant. You’d have an ice cold mug of root beer, a burger and some fries in the comfort of your parent’s car. But I also like the fact that there are lots of small market root beer makers around. Unlike the giant cola companies, small makers of root beer still seem to exist like Thomas Kemper, Virgil’s, Jones Soda and many more. They even have cult-like followers and home brewers, kind of like the beer culture.

So how do you make a Bartenders Root Beer? Here’s how:

In a 12 oz, Collins glass packed with ice build the drink and stir to combine ingredients and garnish with a cherry.

Flavour wise this drink doesn’t exactly match the qualities of a genuine Root Beer. But, it does have that sweet flavour with some herbal notes from the Galliano. Some recipes call for a squeeze of lime, but I skipped that and use Acid Phosphate instead. The drink does benefit from a little acid to cut the sweetness. If you can find a wintergreen liqueur (rare) a dash or two of it will give a more genuine flavour. But, this pseudo-root beer will do in a pinch.

For the true mixologist out there making your root beer isn’t that hard. If you have ever made home-brew beer, then root beer is very similar. 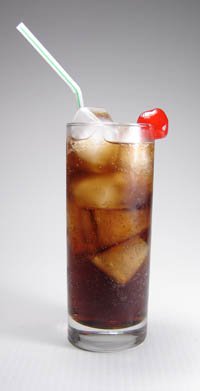 Simmer herbs for 30 minutes. Add sugar, stir to dissolve. Cool to about 35C (94F), pitch the yeast and stir well. Cover and let sit for 1 hour. Filter through cheesecloth and bottle. Store at room temperature for 24 hours. Place in fridge and let age for a few days.

Please note that finding sassafras that is safrole-free may be hard. Safrole was labelled a potential carcinogen by the FDA in the late 1960s, though no human studies have ever been conducted, so using wild sassafras is probably not a good idea since you would be violated an FDA rule. Wintergreen makes an excellent root beer flavour.

Now the last thing is that if you want to look like you are in the “know” don’t order an Orange Crush, Cream Soda or any other odd variety of pop in a bar. Unless the bar is slightly hip and carries products like Jones Soda, most bars won’t stock Root Beer, and when you order one, the bartender will give you that odd look. So if you are craving an alcoholic drink, but want to reflect upon your childhood years, just order a Bartenders Root Beer.