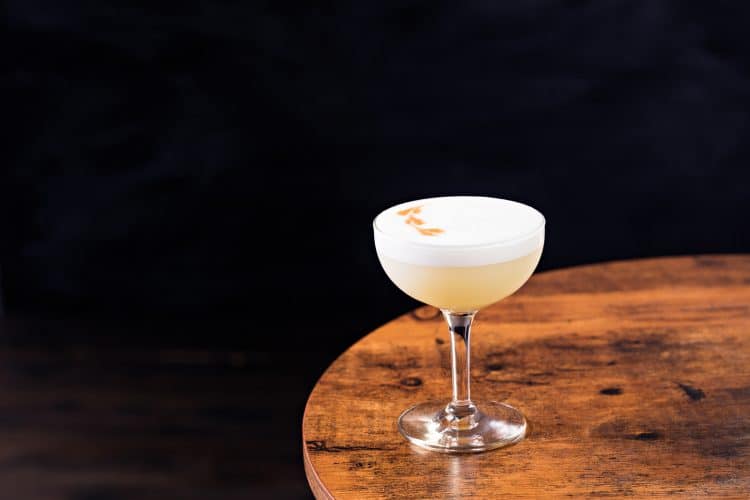 The class of drinks called “sours” are pretty standard. The general recipe is a spirit, lemon/lime, sugar, egg white and sometimes bitters. The Whisky Sour is a classic sour, which is probably the most commonly ordered one in North America. But you can have a brandy sour, a Midori sour or a Pisco Sour. Pisco is the national spirit of Chile/Peru and they are currently still fighting over ownership. Aside from politics, this drink has become a trendy cocktail. It still follows the basic sour formula, but because Pisco is a grape distillate, the flavour is different which seems to intrigue people. Plus raw egg whites are always an exciting addition to a cocktail.

My first introduction to Pisco was years ago when I took up bartending. One of the barbacks was from Chile and we often discussed things that were different between the two countries. Wine was a common topic and spirits were also discussed. After a few weeks, Gabriel (Gabe) told me about this very popular drink in Chile called a Pisco Sour. He gave me very detailed instructions on how to make them and even told me what brands to buy. The one he recommended was Pisco Control Reservado, which is an 80 proof. Curiosity compelled me to mix one up and I’ve never looked back, it is a fantastic cocktail..

Pisco Sours don’t have the sharp edge that a whisky sour has so they are a good egg white based drink for someone getting started with cocktails. They are also more refreshing than a whisky sour, so on a hot summer day, these drinks can go down nicely. If you can’t find a proper Pisco, you may be able to substitute a white grape distillate or marc but the drink won’t be the same.

To make this drink properly, the trick is to get a good frothiness and the only way to do it is using an egg white. I use raw egg whites at home and powdered egg whites at the bar, which you can order online or from your local health food or cake decorating store. There are a couple of rules to follow if you use powdered egg whites in your Pisco Sour. First, you need to give powdered egg whites a moment to rehydrate, so add a teaspoon or two to a cocktail shaker and then add 3/4 oz of water, stir and let rest while you gather everything else. If speed is important, hit it with a stick blender. Also, never add the Pisco, or any alcohol, directly to the egg white powder, it will turn into some polymer like chunk that will never mix into the drink. The juice from the lemon is okay. Other than that, egg whites are what make the Pisco Sour, or any sour cocktail for that matter.


Amount Per Serving: Calories: 160
Liked it? Take a second to support Art of Drink on Patreon!