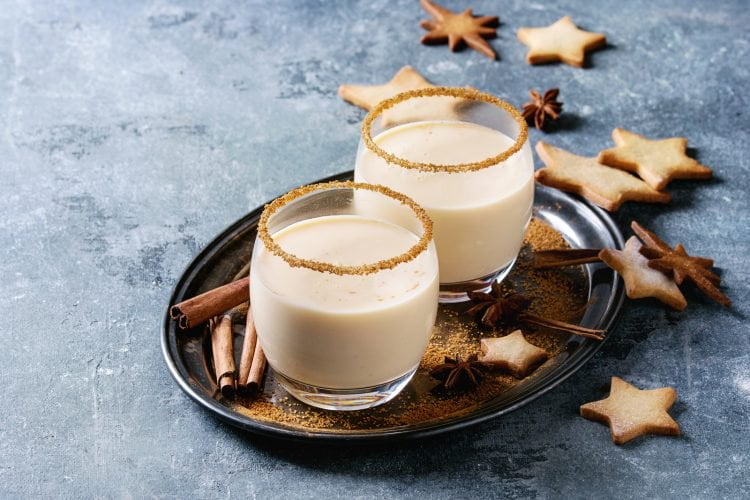 ’Tis the season to drink the egg and cream concoction called eggnog. And what better way to make a batch, because everyone should, than to look back at old newspaper articles and find a centuries-old recipe to sample from, like White House Eggnog and a British Hotpot which incorporates ale and gin. Now if eggnog isn’t your thing, there are some punch recipes in this newspaper article including “A Famous Xmas Punch” which have neither eggs nor cream, and that will be a follow-up post. For now enjoy the eggnog before it is gone.

These recipes come from 1898 and there are a few things to note. First, a “wineglass” is about 2 ounces (60 ml), so if a recipe calls for 8 wineglasses of brandy, then it is asking for 16 ounces. Also, the type of rum would have most likely been barrel proof so if possible use a rum like Wray and Nephew Overproof. And if you can’t find “Tom gin” (Old Tom gin) you can use most other gins, but you might need to add a touch more sugar to the punch.

From the December 19th, 1898 edition of the Baltimore Sun

Recipes for Punch, Eggnog and a Dozen Other Exhilarating Drinks

Yuletide Drinks, Some Time-Tried, Some Novel

Christmas is primarily a season for “good cheer”. A great many persons cannot quite disassociate the idea of Christmas “good cheer” from the convivial bowl. That is why the ambitious hostess bestirs her wits to devise a new, enticing and exhilarating Yuletide beverage.

Among these punch is sure to figure conspicuously. The following recipes are in part time-tried, but wholly commended as artistic and effective.

It is said this drink will make its successful concoctor famous. Mix as follows:

In England hotpot is the universal drink of the Christmas season, being made at no other time. It has been transplanted and now also occupies a prominent place in the list of beverages in America. It is described as “soft, creamy and comforting to the system.” It is also “only a gentle stimulant.”

In making it the details here given, especially as to the order of mixing, must be strictly adhered to, or your hotpot will be a lamentable failure: the eggs, too, must be absolutely “new laid.”

First, put the ale in a saucepan and heat until hot, but do not let it boil; second, beat together the eggs, sugar and spices; third, pour the hot ale into the mixture, stirring all the time; fourth, add the gin; fifth, put the concoction on the fire again, in the saucepan; heat until hot (be sure not to let it boil) and serve hot, in tumblers.

Here is an eggnog that will make its partakers dream of Paradise. Mix as follows:

Into a large bowl throw the Jamaica rum, the brandy and the milk, and stir in the beaten yolks; float the beaten whites on top and serve with a little nutmeg grated over each glass, or not, as preferred. This egg nog recipe will serve twenty people.