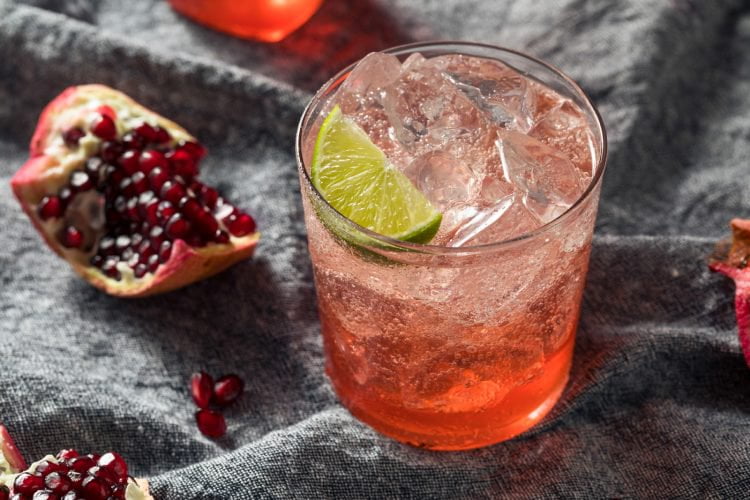 Note: I’ve done some new research on the topic of grenadine and it has a lot of implications for pre-prohibition cocktails. Check it out: What is Grenadine Made From?

In the never-ending quest to discover what makes a great cocktail, I’ve embarked upon a study of grenadine. Sure it may seem like a trivial subject, but I’ve learned that it’s the small things that are often overlooked and led to the downward trend in quality. When we understand simple things, it allows us to create more complex creations. In the world of the chef, the study of salt can take months, or even a lifetime, to be truly understood. A professional chef can use salt to great effect in creating awe-inspiring dishes. Good bartenders should know how to use basic ingredients also. Yes, grenadine doesn’t have the importance of salt, but a good bartender should also be able to identify quality ingredients. So let’s take a look at what makes a good grenadine.

Grenadine is the general-purpose name for a red-coloured sugar syrup used in a variety of cocktails. The name “grenadine” comes from the French word grenade meaning pomegranate, as grenadine was originally prepared from pomegranate juice and sugar. Grenadine is one of the most common, non-alcoholic, items found behind a bar and is an ingredient in many, many cocktails. Originally, grenadine syrup was created with the juice of the pomegranate fruit, which imparted the vibrant red colour. Today most grenadine is imparted with FD&C Red #40 food colouring to give it the vibrant red colour. There are a few manufacturers who are returning to the pomegranate fruit base, but the majority are not for practical reasons, like cost and colour consistency. Even though the flavour is a consideration, the primary role of grenadine is as a sweetener and colourant for cocktails. Otherwise, we’d just use pomegranate juice.

One of the recent trends has been to create homemade grenadine using pomegranate juice and sugar. The basic idea is to concentrate the pomegranate juice, by boiling it down and adding enough sugar to give it a syrupy consistency. Now I’ve tried to make homemade grenadine, and I was less than impressed with the flavour, which is contrary to what most people say. I found that the flavour was too sharp for many cocktails, and the colour was off. For example, if you make a Tequila Sunrise with homemade grenadine it turns a foul brown colour reminiscent of sewage water. (Picture: homage grenadine and orange juice) Sure it may taste better than commercial grenadine, but behind the bar, I’d never sell a drink that looks like that. Plus, who wants to stock multiple types of grenadine behind a bar?

So what exactly is the purpose of grenadine again? I tend to believe it is a colourant and a sweetener first and a flavouring second. Not all may agree with my opinion, but that is fine. This doesn’t mean that I think any old grenadine will do. My preference is for grenadine that is fruit flavoured, not vanilla flavoured. I don’t mind the addition of vanilla to grenadine, but it can’t be the primary taste. I also want the colour to be consistent because, like food, visual appeal is a crucial part of the cocktail experience.

From my perspective, I think that grenadine needs to have a good flavour just like any other ingredient in a quality cocktail. The problem is that what most bars stock as grenadine isn’t remotely quality-driven. It is usually the cheapest stuff they can find.

So in the interest of identifying quality grenadine, in my next post, I’m going to do a review of some commercially available grenadine’s (Monin, Fee’s, Trader Vic’s, Sonoma Syrup Company and Chateau Thierry).

No, I don’t think that pomegranate syrup is just for sweetness and color (also not primarily)!

With the discussion to do homemade pomegranate syrup, I was also more then skeptical.
However, there are alternatives to the sickly sweetish grenadine syrups from the shelf:

There are some producers which went back to the origin. Monin, for example, offers the normal grenadine, however besides also a pomegranate syrup (with only pomegranate juice, sugar and water as ingredients). Deep red it is not only great for the color, but has a really nice sweet and sour pomegranate tang! And there are also other brands around…

Further, I found in a pharmacy pomegranate concentrate (it is made in the US)! It is very similar to pomegranate syrup, but even deeper red, more tangy, with a greater pomegranate taste.. Whether you can take it just like that as syrup, or you can make with it your own pomegranate syrup – mixing it with simple syrup (the proportions are up to your taste)!

Finally I really don’t think, that pomegranate juice in a drink, just gives you the right expression of the fruit! We are using fresh pomegranate juice in the bar – and you can drink it as juice as well as mixing it for example with a spirit as long drink – however it is not really delicious (like eating the fresh pulp) and for real mixing it is very limited! Pomegranate syrup or concentrate gives you indeed a better result in mixology!

I had the same experience last New Years when I made Tequila Sunrises with a new “natural” grenadine (I forget the brand). Not as bad as your outcome, but not the surreal red-pink-orange I was expecting. I cracked open an old bottle of Roses, and the next round was beautiful and tasted fine.

There’s a Tiki drink called “Bilge Water” that’s the same nasty brown as your Tequila Sunrise made with homemade grenadine. If your version tastes great, maybe all you need for the drink to be a success is a disgusting name.

When making Tiki drinks, that bit of grenadine can make a world of difference in the flavor profile. I use pomegranate concentrate and sugar to put together a syrup that is nearly artery red, with an equal balance of sharp and sweet. My Dr. Funk has never been better since I switched to that formula.

Stirrings also has an “authentic grenadine” product available, which I have yet to try, but does keep staring at me from the shelf. Stirrings does some good stuff.

There’s also an old sweetener called Red Hembarig, referenced in “New Orleans Drinks and how to mix ’em”. There’s a discussion on eGullet marking the terminology as some disambiguation of the German word for raspberry, and if you want just sweet ‘n color, raspberry syrup is a damn fine way to go.

You say the grenadine syrop main role is sweeting cocktail, not flavor them…

What about the Shirley Temple?

I think its the easier example I could find 😉

Try a Shirley Temple with ANYTHING but grenadine and you’ll see how important is the grenadine.

I also tried my own syrup and had about the same result has you. Big difference in the color and taste.

What I think is that we should consider homemade and commercially made grenadine has a different ingredient.

it looks like you let the sugar caramelize when you were making the grenadine – i made my own grenadine with about equal parts POM juice and sugar, and prepared it like i was making simple syrup, and i ended up with a wonderful maroon syrup. most importantly, my friends noticed, and appreciated the taste difference.

I also use a cold method to make grenadine and have been pleased with the outcome.

It is admittedly not as bright a red as the candy colored “Grenadine” like Rose’s; but, it tastes very good to me.

Even though it allegedly contains real pomegranate, I don’t care for the Fee’s American Beauty Grenadine. Tastes more like cherry syrup than grenadine to me.