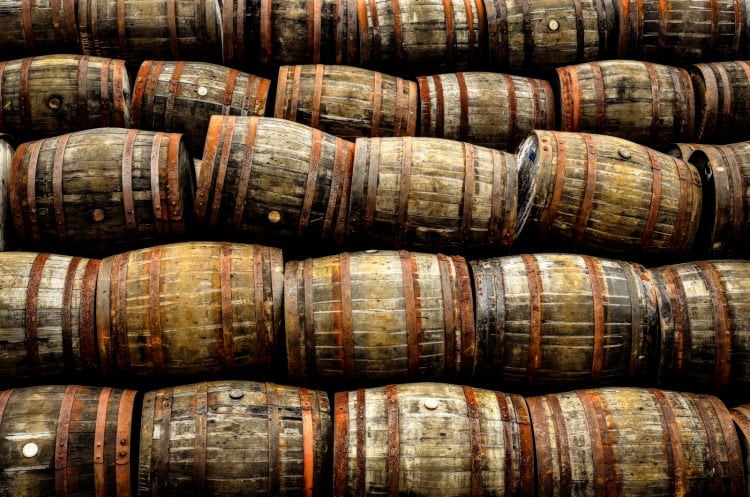 What happens when you age a cocktail? Does barrel ageing help or hinder the flavour and what is happening chemically to the liquor mixture inside the barrel? Do you really need a barrel to make them? These are the questions everyone wants to know about aged cocktails, and really, this is a unique and little-understood process so let’s do the research and discover what is happening.

Aged cocktails first started with bottled aged cocktails by Tony Conigliaro at 69 Colebrooke Row, and then Jeffrey Morgenthaler began to barrel age them for the sake of expediency. Even though Tony and Jeffrey are modern trendsetters, bottle-aged cocktails have been around since the time of Jerry Thomas. I suspect that bartenders like Thomas bottled cocktails for convenience.

In the late 1880s bottled cocktails were becoming popular, but not necessarily aged ones. Customers who had a well-developed relationship with their bartenders rarely deviated from those who knew the intricacies of their drinks. The bartenders at some establishments would bottle cocktails and provide them to customers so they could enjoy their favourite cocktail while travelling or on Sundays when bars were legally required to be closed.

In the early 1900s, the company Club Cocktail was advertising “aged cocktails” as the epitome of taste. These were barrel-aged cocktails, but little is known about the process they used. In fact, we only know about them through some old advertisements.

While doing some research on this topic, I came across a newspaper short story, The Lost Blend (1922) (I assume fictionally) about two bartenders who decided to set up an American bar in Nicaragua, only to discover in transit that there was a 48% tax on all bottled goods entering into the country. Barrelled products were tax-free, so the two men, Riley and McQuirk, purchased two barrels from the ship’s captain and dump all their liquor into them, and hoped that the liquor turned out okay. The first barrel was vile….

“But the other barrel,” said the bartender “did you ever put on a straw hat with a yellow band around it and go up in a balloon with a pretty girl, with $8,000,000 in your pocket all at the same time? That’s what 30 drops of it would make you feel like. With two fingers of it inside you, you would bury your face in your hands and cry because there wasn’t anything more worthwhile around for you to lick. Yes sir, the stuff in the second barrel was distilled elixir of battle, money and high life. It was the colour of gold and as clear as glass, and it shone after dark like the sunshine was still in it. A thousand years from now you’ll get a drink like that across the bar.”

Maybe not a thousand years, how about one hundred? Media people could learn a lot by reading some of these old stories for marketing ideas.

Anyway, now that the aged cocktail trend is becoming entrenched we should try to understand whether there is really something happening during the ageing process. Once we understand that, then we can use the information to make even better cocktails.

In the process of ageing something in a barrel, there are a number of things going on that change the flavour profile. The key two are micro-oxygenation and extraction.

Aged cocktails are basically partially oxidized cocktails. The process can be considered micro-oxygenation because the liquids aren’t completely exposed to the air but are still influenced by it. It is more applicable to the barrel ageing technique but still occurs in bottled cocktails.

Cocktail oxidation is a very complex process and not something that has been studied, but the oxidation of wine has been widely studied, so we can extrapolate some these effects to aged cocktails with vermouth or other wines in them.

When the cocktail mixture is added to the barrel, it is sloshed with air. This is enough to influence the flavour of the drink through oxidation. For example, some of the alcohol (ethanol) can be converted to acetyl-aldehyde which has aromas of green apple, grass, nutty or sherry-like. Some sherries and Madeira are oxidized, hence the association.

Some of the acetyl-aldehyde can undergo further oxidation and turn into acetic acid. This can be good or bad. Excess acetic acid can make a drink harsh, but a small quantity can add some flavour depth. Improperly stored wine will often develop acetic acid.

There are literally hundreds, if not thousands, of compounds in a cocktail that can undergo oxidation or other reactions. All of these reactions will influence the final product, good or bad. Overall, there seems to be a net benefit with short ageing times.

When people think of barrel-aged spirits, they think of things like whisky, brandy and rum. The flavours that come to mind are vanilla and oak, and any residual flavours from the barrels previous contents (sherry, etc.). Additionally, it is well known that barrel ageing smooths out spirits and this is what I want to focus on.

Current research points to the extraction of hemicellulose from the wood as a key factor in smoothing out harsh spirits. Hemicellulose is most commonly found in plants and accounts for 22% to 25% of white oak. The research paper “Oak Wood Hemicelluloses Extracted with Aqueous–Alcoholic Media” (Applied Biochemistry and Microbiology, 2006) makes the following conclusion about hemicellulose:

“It is assumed that this (hemicellulose) makes drinks more full-bodied and makes them softer.”

There really isn’t any surprise that barrel ageing makes drinks “softer”, but the paper discusses some aspects of why. One of the keys is acidity.

“It cannot be ruled out that storage in an acid medium is accompanied by partial hydrolysis of hemicelluloses, which is considered the cause of the increased content of reducing sugars, improving the taste of the drink.”

What this is basically saying is that the acidic liquids extract more hemicellulose, creating a smoother drink. Spirits tend to be less acidic than wine, so the extraction process takes much longer. With barrel-aged cocktails, many of the recipes increase the acidity through the addition of vermouth and sherry. The increased acidity helps to increase extraction, resulting in noticeable changes to the flavour of the cocktail in a short period of time. Obviously, over-extraction or ageing will create a “flabby” cocktail, much like wines that are low in acidity.

The paper also shows that lower alcohol concentrations extract more hemicellulose and its associated sugars: glucose, fructose, xylose, and arabinose. The lower alcohol extraction is significant, extracting five times more at 40% ABV compared to 70% ABV. With a standard cocktail recipe, sans dilution, the ABV would be in the 20% to 30% range, possibly leading to increased hemicellulose and sugar extraction.

Increasing acidity is easily done with wine and vermouth, but fruit juice should be avoided because the juice can become putrid. This is more of an issue in barrel ageing techniques versus bottle ageing.

The trick with increasing acidity is to use a stable, reasonably pure acid. The primary acid in wine is tartaric acid, with citric, malic and lactic acid making smaller contributions.

Lactic acid is a good choice for barrel ageing, as it is the acid found in Lambic style beers like Gueuze and Kriek and both are barrel aged for up to three years. Anyone who enjoys Lambic beers would find lactic acid (Lactart) a useful addition to their ingredient repertoire. The flavour of Lactart is often described as softer and smoother than other acids.

Between The Sheets (Variation)

* The original recipe called for ¾ oz of lemon juice, but Lactart is stronger than lemon juice, so the quantity needs to be reduced.

Now that you’ve read this you may feel compelled to begin experimenting, but what do you need to get started? First, a barrel is cool and aesthetically pleasing, but not really necessary. Oak chips and oak infusion spirals will work perfectly fine, even though wine aged with oak chips is considered fraud according to the European Union.

Now don’t label me as a heretic. Most of the scientific research on the subject has shown that “Wines obtained with oak wood fragments were not significantly rejected either by consumers who answered the questionnaire or by consumer tasters….”. This isn’t to say there isn’t any difference, research shows that there is some for wines, but the short aging cycles for cocktails will be limiting. Choice of oak type (French, American, Spanish, etc.) will make a bigger difference.

One negative about oak chips is quality. Oak chips are obviously not the best pieces of oak and may contain “tainted” wood. In large batches a few tainted chips wouldn’t have much of an effect, however, in a 750 ml bottle, it could have a negative influence. The other downside is that the chips have a very large surface area and because of this, over-extraction can happen very quickly.

My recommendation would be to start with oak infusion spirals. The spirals allow you more control over the process because of their uniform size and shape. This allows you to give them a consistent toast. They can also be reused.

Once you have some oak, all you need to do is pick a cocktail, put it in a bottle and add the oak and be patient.

1. Avoid fruit juices
2. Dilution is important, aim for 20% to 30% ABV
3. Increase the acidity with wine acids, Lactart or Acid Phosphate
4. Sample while ageing to avoid excess extraction and flabbiness.
5. Include something with sugar, as that will help the extraction process.
6. If using oak chips, select larger sized chunks.
7. Track the development of the ageing with tasting notes. If you don’t have good notes, how will you recreate your “Elixir of Battle, Money and High Life”.

The aging process is extremely complex, so this article isn’t meant to be conclusive. However, it is meant to give everyone a better understanding of what is happening inside the barrel and some ideas on how to influence the aging process. If you have any questions, post them below and I’ll try to answer them.

p.s. I call dibs on the cocktail name “Elixir of Battle.”

Jeffrey Morgenthaler will be doing a session on Barrel Aged Cocktails at Tales of the Cocktail this year.

Effect of Micro-Oxygenation and Wood Type on the Phenolic Composition and Color of an Aged Red Wine (Journal of Agriculture and Food Chemistry, 2009)

Wine consumption habits and consumer preferences between wines aged in barrels or with chips. (Journal of the Science of Food and Agriculture, 2011)

Maturing Wines in Oak Barrels. Effects of Origin, Volume, and Age of the Barrel on the Wine Volatile Composition (Journal of the Science of Food and Agriculture, 2002)

Solute Effects on the Interaction between Water and Ethanol in Aged Whiskey (Journal of the Science of Food and Agriculture, 2004)