After preparing all of my test solutions on a, sunny, Saturday afternoon, I decided that a beautiful Tuesday evening was perfect to spend in the lab, the same lab I spent all day in. But the effort was for a good cause, which was to answer the nagging question: Does Grey Goose Contain Glycerol? It’s one of those questions that people have debated for a long time, but as far as I can tell, nobody has ever tried to answer scientifically. Today, you will get an answer, but as with any scientific endeavour, we need to look at the results and decide what they really mean.

When I was planning this experiment, I had originally planned to use Liquid Chromatography to identify any glycerol. The problem was I don’t have any chromatography instruments in the lab I work. So I opted to use a tried and true titrimetric method that uses sodium periodate to oxidize glycerol to formic acid, which is then easily titrated.

Once I decided on the method, I did some quick research to determine if ethanol, or other contaminants, would be a concern. I didn’t find any, but I did find some research that used ethanol as a solvent in their glycerol tests, without issue.

In all, I tested 19 samples. I performed triplicate testing on the Grey Goose sample as well as the laboratory 100% Ethanol sample. The analytical grade, anhydrous, ethanol (EtOH) was actually 30ml of ethanol, diluted with 45ml of double distilled reverse osmosis (DD-RO) water. This was done to replicate the standard 40% ABV found in most vodkas, or to compare apples to apples. One sample was a “blank” which consisted of 75ml of DD-RO water and was put through the paces, like every other sample. This is a basic “correction factor” that also helps remove false positives. Any result from the blank was subtracted from all other samples.

For the test, I selected 75 ml of each sample. This number was an educated guess on what levels of glycerol might be expected. Since vodkas are allowed additives up to 2%, the maximum glycerol content would be 1.5g in 75ml, but more likely in the 1% or less range, which is the “sweet spot” for this titration method.

All sample bottles were washed, rinsed with distilled water and then rinsed again with a corresponding sample of vodka to avoid contamination.

The first step of the test is to adjust the pH of each sample to 8.1 +/- 0.1. This is the end point of the titration, so if any formic acid is formed, by the reaction of glycerol and periodate, the pH will decrease and be titrated.

The second step is to add an excess of sodium periodate solution to oxidize the glycerol. After a minimum of 30 minutes reaction time, ethylene glycol is added (not to be confused with the glycerol). This reacts with any remaining periodate, forming formaldehyde, which has no effect on the pH. The final step is to dilute the solution, insert a pH probe, or Phenol Red indicator solution, and begin titrating with 0.1M Sodium Hydroxide (NaOH). For accuracy, I used a pH probe but did a few practice samples with an indicator. For each millilitre of NaOH used, to titrate back to a pH of 8.1, that will correspond to roughly 10mg of glycerol. 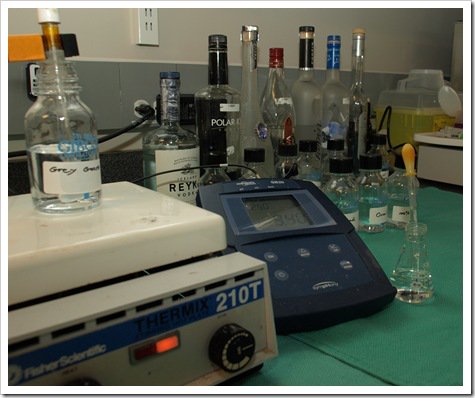 One vodka that was positive was Pravda, a “super premium” sample that titrated at 7ml, which is a low number or roughly 0.1%. Other samples, like the UVE Alexander Grappa, titrated with 36ml which is roughly 0.5% glycerol.

More than one sample demonstrated “weird” behaviour so I didn’t run the test on them yet. In these cases, I’d like to run multiple samples to rule out contamination or other factors. (Note: The issue was later identified as sorbitol, another sugar-alcohol that would have similar effects to glycerol in smoothing out harshness.) Considering this was a preliminary test, and personally financed, running everything in triplicate would require about 5L (over 1 gallon) of vodka. Even though I’m not a big fan of vodka, I’d rather drink it than toss it down the sink.

Overall, this method identified some spirits that contained glycerol, but most samples were comparable to the EtOH sample.

Samples, where glycerol was not detected, were: 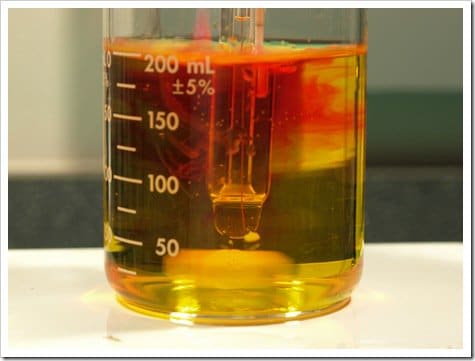 The absence of positive results for glycerine does not mean there are zero additives in vodka or any other spirit for that matter. It just means that using this method, glycerine was not detected in appreciable quantities, in this small sample size. It is quite possible that these brands don’t use glycerol, or it could be that this method doesn’t work very in alcoholic environments. My opinion is that glycerol is not used in any appreciable quantity, in the vodka’s tested, except Pravda.

Other vodka brands may use glycerol and there may be other additives at play (sorbitol).

One thing I should have done was run a positive control, to test whether the high ethanol levels interfere with the test. My educated guess is that it doesn’t, but tomorrow I’ll run a sample of EtOH spiked with a known quantity of glycerol and find out definitively. (It doesn’t interfere)

There is still the matter of why there is a sticky residue left when you evaporate vodka between your hands, by rubbing them together. Some vodkas do (Grey Goose, Absolut) while others don’t (Banff Ice, diluted lab grade ethanol and disinfecting hand gel). To figure this out, I suspect I’ll need to locate the chromatography department and run some advanced tests that will conclusively answer these questions.

Does Grey Goose contain glycerol? No, and in the immortal words of Jamie Hyneman and Adam Savage: Myth Busted!