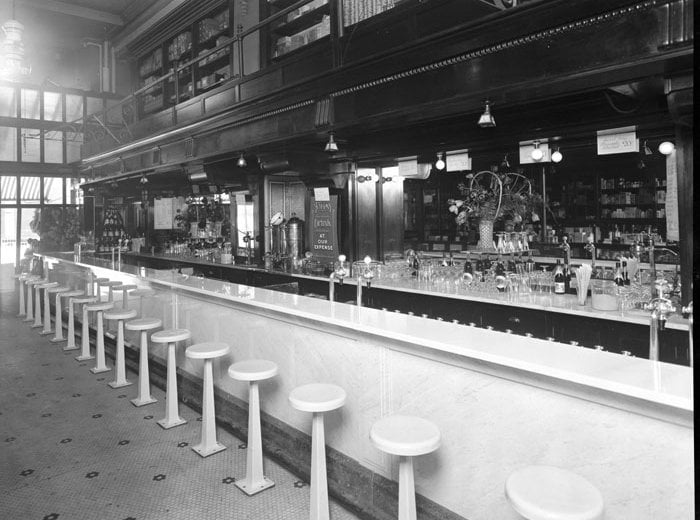 Naturally carbonated waters, from volcanic springs, were well known throughout history and prized for their unique properties. The effervescing nature of the water was an attractive quality and was thought to be a natural tonic. The problem was that capturing and transporting these mineral waters was costly. Only a few places stocked mineral waters, with pharmacies being the most common.

The stomach soothing nature of these effervescent waters made them a regularly prescribed treatment for dyspepsia or indigestion. The lack of side-effects from a glass of soda water, unlike many other medicines of the time, helped motivate researchers to discover, and recreate, how these gas bubbles dissolved in water.

The foundation for man-made carbonated water starts with Englishman, Joseph Priestley, in 1767. The first discovery was infusing water with carbon dioxide by placing water over a fermenting mash. The carbon dioxide is given off by the yeast dissolved in the pure water suspended over top. This would have been very weakly carbonated, but sufficient to realize that it was possible. His research led him to publish the book “Impregnating Water with Fixed Air” in 1772.

In 1783, German-born Johann Jacob Schweppe used this information to invent a device to create artificially carbonated water. He sold his company in 1799, but his name is still prevalent today as the Schweppes Company.
Artificially carbonated waters quickly caught the attention of the public. Given the medicinal properties ascribed to mineral water, the idea of being able to recreate mineral waters was compelling. Making these waters available to everyone—by adding formulated salt mixtures that mimicked mineral waters from around the world—was desirable for businessmen and physicians alike. These artificial waters eventually transformed into flavoured soda when businesses started adding flavours and sugar to the soda compositions.

Before devices were created to artificially carbonate water, people realized they could duplicate the tingling sensation, though poorly, by combining sodium bicarbonate and tartaric acid in water. This resulted in a glass of fizzy saltwater similar to Alka-Seltzer. To make the drink more palatable, fruit juices and artificial flavours were added. To make the effervescence convenient, the tartaric acid went in the flavouring and the sodium bicarbonate in the water. When the two liquids were combined, it would fizz. This was the precursor to modern soda-pop.

At the turn of the 19th century, chemists continued experimenting with methods of impregnating carbon dioxide gas in water. It still hadn’t achieved a level of efficiency that made wide distribution possible. However, it was becoming fashionable to have soda water at home.

Improvements continued until Charles Plinth invented the soda syphon in 1813. This syphon allowed portions of water to be dispensed while retaining carbonation in the unused portion. This was a major advancement over corked bottles.

These improvements helped, but the syphon bottles still had to be filled at a manufacturing facility, delivered and the empty syphons then collected for refilling. This method was tedious and inefficient, but better than glass bottles.

Mathews’ fountain designs were spartan but functional. They consisted of a lead-lined chamber where sulphuric acid and powdered marble (calcium carbonate) were mixed to produce carbon dioxide. The generated gas was purified and then sent to a tank of cool water. The tank was manually sloshed around, for thirty minutes or more, to help the gas dissolve, and then piped to the dispensing tap. These units were sold as bottling systems and fountains. Used as a fountain it was revolutionary in terms of efficiency.

It is estimated that New York City had over 670 soda draught fountains in 1836.

With the inefficiencies of the syphon bottle removed and self-contained units being sold at a lower price, the barriers to entry were now reasonable. The improved soda water capacity also helped increase the number of sodas being served from a couple dozen per day to a couple hundred and, in some cases, thousands. The lower start-up costs spurred the growth of soda fountains across America, giving it legs and booming sales.

It wasn’t uncommon, in the early years, for soda fountains to explode. The process for making carbonated water was not particularly safe. The biggest threat was when the pressure vessel holding the carbonated water failed. When this happened, metal, glass and people were sent flying about the store.

These explosions were caused by improper mixing of the sulphuric acid with powdered calcium carbonate. Because this was the least desirable job, it usually fell upon “green hand” employees to do the mixing. When done properly the components would be mixed at a controlled rate, producing a steady stream of carbon dioxide. When mixed by an inept neophyte, excess gas would be produced eventually rupturing the tank.

Over time the systems became safer, and in larger cities, CO2 cylinders were being supplied by enterprising companies, so fountains no longer needed to produce it.

John Mathews made the soda fountain efficient, but G.D. Dows made it an eye-pleasing apparatus. With the combination of functionality and style, it was now a vital investment for every pharmacy.

This new breed of fountain was decked out in marble, onyx and brass with large mirrors and elegant decorative elements. The best fountains had gold trim with Tiffany lamps and Favril glasswork. They were not the kitsch designs of the 1950s diner, with wild colours and over-the-top branding. Classic fountains were more akin to the greatest hotel bars in the world with classy, dignified decor.

By 1875, there was a soda fountain in almost every city across America. It was now becoming part of the American culture. In the peak of summer, sales were reaching 1200 glasses of soda per day. This was a period where soda fountains gained critical mass and started to compete with the local taproom.

The soda fountain started to gain international attention as early as the 1890s, with cities around the world partaking in this new flavoured beverage. The first European cities to adopt these flavoured seltzers were London and Paris. Even though natural mineral waters were extremely popular in Europe, it was America’s lust for sugar that made the combination a success.

The feverish growth of the soda fountain created a highly competitive environment. Not only were pharmacies competing amongst each other, they were vying for customers from the local saloon and confectionary shops. This unbridled rivalry meant that each competitor needed to create the perfect drink, at the lowest possible price, to attract customers.

Public houses commanded the drink business for years, even at significantly higher prices, because of the inebriating effects of alcohol. In an effort to compete, druggists conjure up pharmaceutical concoctions that easily trounced the saloons best offerings. Once these drinks were unleashed on the public, the bracer and pick-me-up would never be the same again.