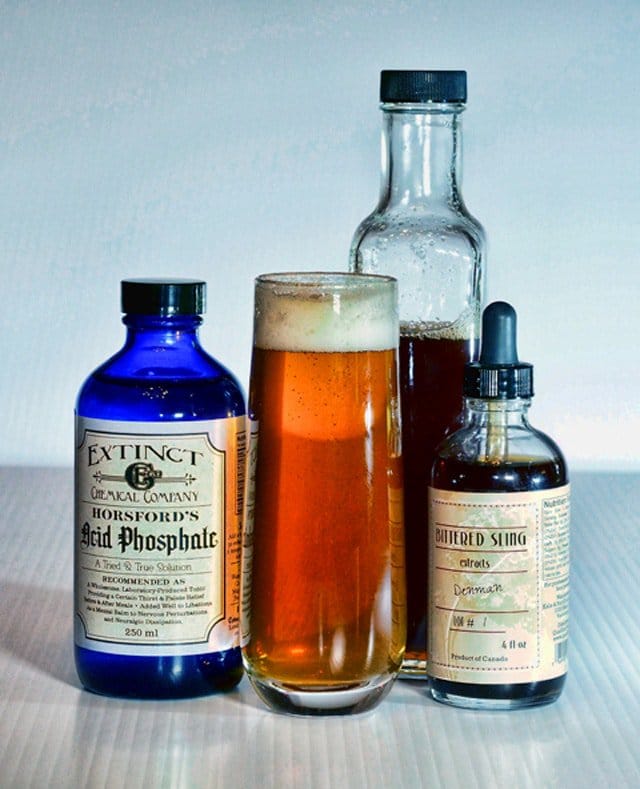 When you think about the fortified wine called sherry, the soda fountain probably doesn’t come to mind, but it should. People have done a great job sanitizing the evils of the soda fountain from our collective mind, but just like bars, soda fountains in the 1800s had a large repertoire of drinks including spirits and fortified wines. I’m sure you could get these alcoholic tipples straight if you asked nicely, but the preferred way to serve them was mixed with soda, like the PX Phosphate.

Pedro Ximenez is a grape variety that is used to make a sweet, fortified sherry of the same name. These wines are very sweet and may contain anywhere from 212 grams of sugar per litre (g/L) up to 500 g/L. To put that in perspective, the wine in the bottle is roughly 50% sugar which makes it similar to flavoured simple syrup. The reason for the high sugar is due to the drying of the grapes before fermentation. They are fermenting raisin juice. Even at the lower end of sweetness, these wines are cloyingly sweet, which makes them excellent as a digestif or even better for mixing.

The Sherry Cobbler was, for a long period, the most popular drink in the land. In its elementary form, the Sherry Cobbler is simply sherry, a touch of sugar, ice, a fruit garnish and a straw. Most of these cobblers were made with drier sherries, like Fino or Amontillado. Soda fountains probably noticed this trend and created soda styled drinks like the Pedro Ximenez Phosphate, but there were also drinks like the Madeira Phosphate and the Oporto Port Phosphate.

Because Pedro Ximenez is a bit unwieldy to say, it is often shortened to just PX, which creates a rather cool name for this drink, the PX Phosphate. The name sounds like a chemical warfare agent, and that is just fine with me because drinks with alcohol are often tied to deadly names.

PX style sherries often contain flavours of nuts, raisins, chocolate and brown sugar and even a touch of cola, making them very rich and flavourful—perfect for soda.

The base for any soda is a flavour syrup, and this syrup was originally found in “Soda Fountain Beverages: A Practical Receipt Book” by George H. Dubelle (1917).

Instructions: To make the PX Phosphate draw 6 oz of soda into an 8 oz glass and then add 2 oz of the PX syrup. Stir gently with a spoon.

*If you don’t have PX Sherry available, you can use a Cream Sherry.
**Amazon flavouring is a bitter, the complete recipe can be found in Fix the Pumps, but it is relatively complex. Instead, I substituted with another cocktail bitter that I thought would work well, Denman by Bittered Sling.

The Acid Phosphate, because of its neutral sour flavour (i.e. it doesn’t taste like lemon or lime) works perfectly because it doesn’t interfere with the flavour of the sherry allowing those deep flavours to shine. It also gives the drink a bit of zing and sparkle.

The recipe is simple and can be adjusted to any flavour profile. You can make it sharper by adding more Phosphate or by using less simple syrup, or more complex by adding more or different bitters.

In my opinion, this is a brilliant soda style drink. I could drink many of these. The best part is that this is a low alcohol drink weighing in at a mere 2% abv. It would be a nice buffer drink between an Old Fashioned and a Manhattan when I sit at your bar. It is also a great drink to help rotate your sherry inventory. Most bars have a bottle of Harveys Bristol Cream that gathers dust on the back bar, and the PX Phosphate might be a good way to keep the bottles fresh and less oxidized.

Acid Phosphate is available through Art of Drink, as well as The Boston Shaker, Prarie Moon and you, can pick up bottles at the Ice Cream Bar in San Francisco amongst other places. I also provide discounts for bars and restaurants, email me ([email protected]) for more information.