Bourbon is a whiskey with a long history of tradition and craftsmanship. Very few spirits, let alone other whiskies, have bourbons well-defined production specifications. The laws, on bourbon production, create a very flavourful spirit, but with such well-defined specifications, some companies lose interest in creativity. Not Woodford Reserve, and their Master Distiller Chris Morris. For the past few years they have been releasing a series of uniquely crafted bourbons, and occasionally stepping slightly outside the bourbon envelope, to produce truly unique products called the Master’s Collection. This year, they have released Woodford Reserve 1838 Sweet Mash Bourbon.

As a guest of Woodford Reserve, I had the opportunity to visit the distillery, in Kentucky, and attend this years launch of the new Master’s Collection edition. Previously they have released a Four Grain Bourbon and the Sonoma Cutrer, which was aged in chardonnay barrels for a few months. By legal definition, the Sonoma Cutrer edition was not a bourbon, but a pleasant whisky none-the-less.

The 2008 release is a sweet mash bourbon. Now, if you are not familiar with this term let me share with you Chris Morris’ (Woodford Reserve’s Master Distiller) explanation with my own unique twist.

First, let’s get everyone up to speed and define a “mash”. Basically, a mash is grains (corn, rye, barley, wheat) that are coarsely ground and mixed with water. Heating is necessary to convert the starches in the grain into fermentable sugars for the yeast to consume and convert to ethanol. That is basic mashing. 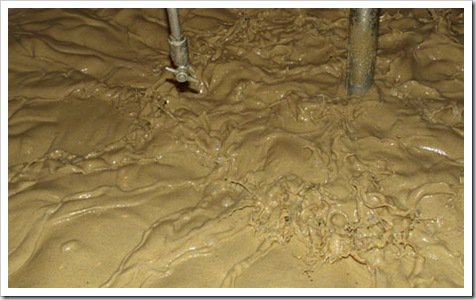 Following the recipe above creates a sweet mash, common in Canadian, Irish and Scottish whiskies. The pH of the mixture is fairly neutral (slightly below 7 or equal to rain water). That may not sound particularly interesting, or new product worthy, except for the fact that every bourbon on the market today uses a sour mash process.

Sour mashing is a technique discovered, not surprisingly, at the Old Oscar Pepper Distillery, now the Woodford Reserve distillery. The method involves taking a portion of previously fermented mash and putting it into a new “sweet” mash. What this does is lowers the pH of the new batch, plus a few other things that aren’t pertinent to this story. To understand what this sour mashing does, let’s talk yeast.

Yeast are small single celled organisms that metabolize sugar(s) and produce carbon dioxide, ethanol and a few other things. They, like every other living organism, have habitat preferences. They generally like being wet and warm with temperatures around 90°F / 32°C. They also like a particular pH, in the 5 to 6 range.

When yeast have a comfortable environment, they will perform well at converting sugars, but more importantly, they perform consistently. Because a sweet mash has a pH around 7, this isn’t particularly comfortable for yeast. Given some time, yeast will influence their environment and make the conditions more comfortable.

As an analogy, let’s take someone like Stephen Beaumont, a world renowned beer and spirits expert. If we stuck him on a desert island, with only cases of Bud Lite and Zima to drink, he’s not going to be really happy. Actually, he’d probably be so unhappy there would be warning beacons surrounding the island. But, Stephen would eventually figure out a way to make his environment better, using some method to convert coconuts into the best beer ever, like the professor on Gilligan’s Island. But not before making a lot of trial and error “by-products” that collect on his island.

Now, what does Stephen Beaumont drinking Zima have to do with yeast making bourbon? Well, as we noted, when yeast are in a good environment they perform as predicted, and you will typically get a consistent fermented mash. But when yeast are moved into a stressful environment, they will perform differently. The changed environment will cause the yeast to produce different fermentation by-products, much like the by-products on Stephen’s island. These different yeast by-products eventually end up as congeners in the distillate. And as we should all know, congeners are impurities that give distilled spirits their unique character.

Sour mashing is like doing an airdrop of Trappist Ale’s onto Stephen’s island. Basically, the airdrop would make the environment more habitable, and Stephen would start to act normal again. Sour mashing creates a pleasant environment for the yeast by lowering the pH.

Because the bourbon industry has pretty much standardized on sour mashing, it presented a great opportunity for Woodford Reserve to create a unique, sweet mash, product. With the sweet mash, Woodford’s typical yeast strain performed differently with the higher pH starting point, and created a different flavour than the standard Woodford Reserve.

Even though the bourbon industry has lot’s of rules, sweet mashing still makes a genuine bourbon. Historically, sweet mash would have been used for all bourbons prior to the discovery of sour mashing, but fell out of favour over 100 years ago.

When comparing the 1838 Sweet Mash to the standard Woodford Reserve, the most striking difference was the nose. After adding a splash of water, and giving it a minute or two to open up, the difference was impressive. The aroma was more intense, with maple syrup and oak being front and centre.

Taste-wise, the 1838 was straightforward, clean, fruity and had a good spicy rye element. Again, there was the maple sweetness displayed in the aroma.

The finish was warm with a pleasant lingering rye spice.

The 1838 Sweet Mash is definitely a unique product, but still a classic bourbon. I’ve always liked a whiskey with intense aromas and this product delivers. If you love bourbon, this will be a great addition to your collection.

Woodford Reserve 1838 Sweet Mash will be sold in Canada for the first time at the LCBO. It will also be available in 26 states in the United States. The bourbon is individually hand-numbered and is bottled at 86.4 proof with a suggested retail price of $129.95 in Canada for a 750mL bottle and will be available in early December.