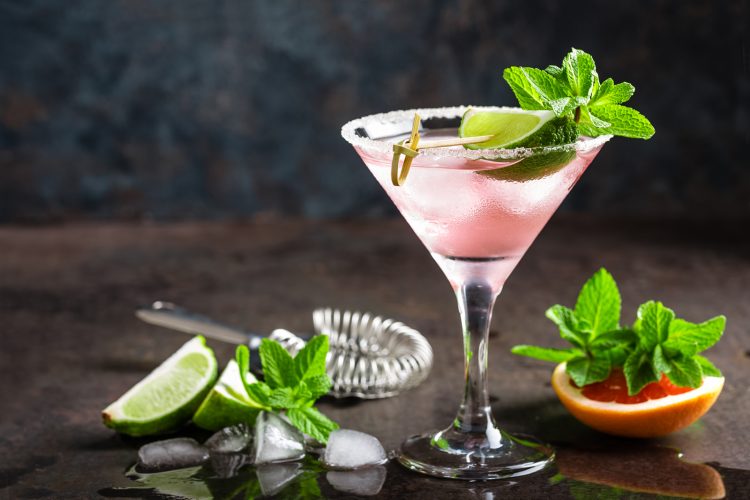 Almost every bartender has had a request for a French Martini. What strikes me odd about this cocktails is that there is not a lot of French in this cocktail. But then again so many cocktails suffer from this problem. The part that makes this cocktail French is the Chambord black raspberry liqueur. The vodka and pineapple juice are not that French, but they do combine nicely in this cocktail, in a martini fashion.

The key ingredient in this cocktails is Chambord, which is made from black raspberries, honey, vanilla and some herbs which has been made for about 300 years in France (since 1685) and is a sweet, all-natural liqueur. Unlike other synthetic flavoured liqueurs, Chambord is versatile in cocktails. It is relatively light in alcohol, at 23% abv, and has a retail price of $38 CDN ($30US) for a 750ml bottle.

The French Martini was created by the Chambord liqueur company for a worldwide promotion. It seems to have worked, and the cocktail is now quite popular. This is what liqueur and spirit companies need to do when creating cocktails. Most spirit companies just take the name of their product and apply it to a long list of classic cocktails. That’s just so boring and unimaginative. But in Chambord’s case, they created a popular cocktail that is original and tied to the product. That is better marketing.

Shaking vigorously gives the drink a nice frothy texture due to the pineapple juice and give it that pleasant pink colour.

Shaking for 20 seconds ensures the drink as cold as it gets; nobody likes a warm cocktail.


Amount Per Serving: Calories: 230
When the Chambord company was creating this cocktail, it might have been more French to include Cognac instead of vodka. One of these days I’ll shake one up with brandy and check out whether it works or not. They probably tried it and decided that for mass appeal and the martini moniker, vodka was the proper choice. For now, if you want to put a little more “French” in your French Martini, use Ciroc vodka which is a grape-based vodka. Or you can use the ubiquitous Grey Goose vodka which is of French origin (Cognac region).

Another good cocktail to make with Chambord is simply adding an ounce to a flute of champagne. This is a much nicer cocktail than a Kir Royale, even though a Kir Royale is a great drink. It’s good to mix thing up every once in a while.

Want to try something different? How about a Sex on the Beach