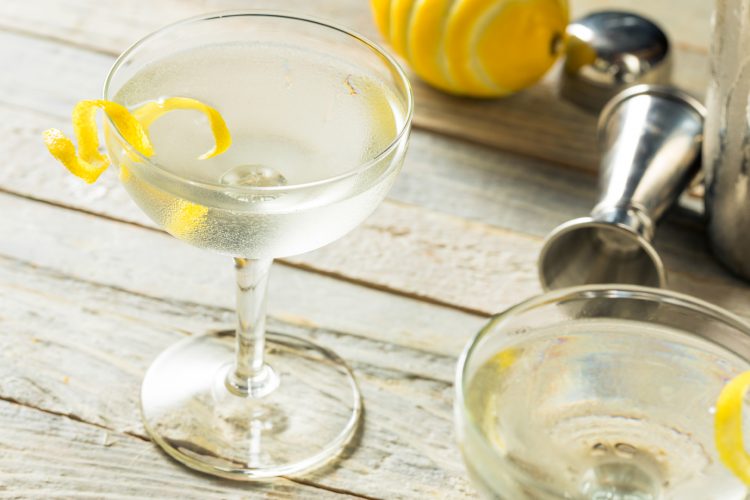 With the James Bond flick Casino Royale having been in theatres, many cocktail enthusiasts eyes were looking for the appearance of the Vesper Martini. This cocktail is a “James Bond” original, actually an Ian Fleming original, but who cares. For the most part, it is a variation on a Martini, and all bartenders know what Mr. Bond did to the martini world. “Shaken not stirred, please.” Wow, I never heard that one before. Anyway, the Vesper Martini isn’t a cocktail that works in movies but not in real life. The Vesper can hold its own in the cocktail world. So all my fellow bartenders, get you bottles of Lillet ready, I suspect someone is going to come to your bar and order one.

When I was growing up, I never read any James Bond books, but my mother was an avid fan of Mr. Bond. So, if a 007 movie came on TV I usually had to sit and watch. Of course, this was back in the day before VCR’s and digital cable, so you watched it when it was on TV. Like clockwork, halfway through every Bond movie I’d be sent to bed because it was a school night. My mother always promised that I could watch it as a rerun in the summer. Well, James Bond never re-aired in the summer, so I don’t think I’ve ever watched the ending of a 007 movie. Anyway, I was always awake long enough to hear Mr. Bond order his martini.

In the book Casino Royale (1953), Mr. Bond ordered a very specific martini. Specifically, he ordered a martini made with three parts gin, one part vodka (wheat or grain-based) and ½ a part Lillet. The drink is to be shaken, not stirred and garnished with a lemon twist. It is to be served in a deep wine goblet. The final item is that the drink should be served “big”. As in 3oz gin, 1oz vodka, and 0.5oz Lillet. Where I live and work, I could not legally serve Mr. Bond.

This Vesper Martini is very drinkable when cold. The Lillet adds more sweetness and tropical aromas (lychee) than dry vermouth. The vodka cuts back on the herbal notes of the gin. The lemon twist always goes nicely with a gin-based martini.

I have not heard if the Vesper Martini will make an appearance in the theatre release of Casino Royale, but Mr. Bond will likely order a martini in his trademark way. At one point in time, it was thought that Mr. Bond was going to order a bottle of Heineken. You see, Heineken made a big contribution to get their product into the movie, for the critical advertising spot. But, from what I’ve read Mr. Bond doesn’t order a beer.

It will be interesting to see how many people order a Vesper Martini after the movie comes out. I’d be surprised if nobody did because the Cosmo and Mojito became extremely popular after their TV and big screen appearances. As a bartender I don’t care if you order one, actually, I’d be happy that someone is willing to expand their cocktails horizons. But, please, please, please don’t order it “shaken, not stirred”, you’ll just get my ego whittling stare, or maybe a big loud “yes Mr. Bond, right away”. That’ll make everyone laugh, but not you.

A proper martini is stirred, but Mr. Bond is a rebel so he likes them shaken.