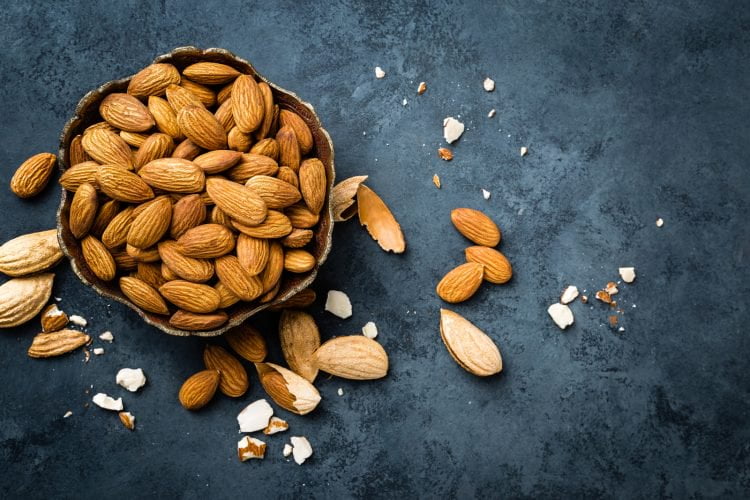 Many classic cocktails, tiki drinks and soda fountain drinks use orgeat syrup as an important flavour component. It is most famous for contributing to the original Mai Tai, but it can be found in many other classics including the Scorpion, Japanese cocktail and the traditional French drink called the Momisette. Orgeat, sometimes called “French Orgeat”, is simply a sweetened almond syrup with a little orange flower water. The origins of this syrup are interesting, and the taste and versatility in drinks are impressive.

Orgeat is the French form of the word which originated from the Italian word orzata which means barley water or sometimes almond. The Spanish word Horchata or orxata has a similar origin. This syrup is an oil-water emulsion of the oils in the almond. This makes orgeat very similar to milk. Before using almonds, these emulsions were made with barley.

Note: an emulsion is simply a mixture of two unblendable substances. The two substances are separated, but because they form very small droplets, they do not easily separate out, so instead of forming layers, they form a cloudy liquid. Milk, butter, hollandaise and mayonnaise are all emulsions.

When I first posted this article, back in 2006, this was one of the reference points for the recipe and was my introduction on how to say orgeat properly—I say “or-zat”, like the article from 1911 shown below. Many people say “or-geet” and most looked at me funny when I said it differently, then they realized I was Canadian and probably assumed it was just my funny accent. Say it whatever way you are comfortable, we’re not judging. 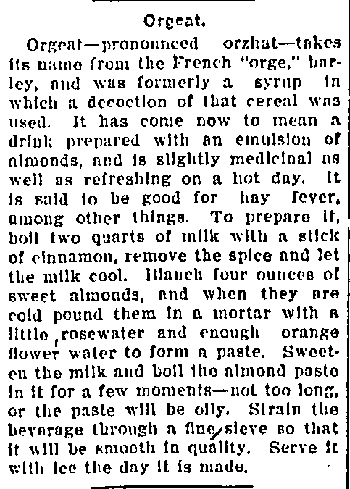 Before refrigeration, people could not store milk because it would spoil very quickly. The only people who may have drunk milk would have been farmers, but for the most part, milk was turned into cheese, because it could be stored for a long time and sold as a commodity. Now if you pulled milk and butter out of your recipe book, there wouldn’t be much left to cook, especially pastries. The solution hundreds of years ago were to use a stable oil-water emulsion made from barley and eventually almonds.

The oils in barley and almond are relatively stable at room temperature, and higher temperatures, so they don’t spoil very quickly. This makes them perfect for a milk like substitute. In the old days, a person’s kitchen would contain a store of barely or almonds, depending on the climate, and when you needed a source of fat, you would use these. As time progressed and food became more of an art, the use of water/oil emulsions increased.

The basic process was to take a number of almonds and crush them up in a mortar while adding water. This would extract the oils in the almonds and emulsify it with the water. After, let the mush sit for a while it was filtered through muslin cloth and the resulting cloudy liquid was used in place of milk. It could even be whipped or churned to make a butter-like substance. Plus, it didn’t go rancid, and there was no need for refrigeration.


Amount Per Serving: Calories: 75
As time progressed and modern amenities arrived, like fridges and fast transportation, the use of almond milk diminished. However, a cordial was made using the same process, but sugar and a key flavouring orange flower water, from orange blossoms, were added and henceforth it was known as orgeat.

Make in a 10oz Collins glass filled with ice.

Add pastis and orgeat to a glass, fill with ice and top off with sparkling mineral water.

This is just one orgeat syrup recipe, and there are a number of variations. You can also vary the amount of water, almonds, orange flower water, etc. since orgeat is very forgiving. The recipe is fairly well balanced and gets good reviews from those who have tried it.

Very interesting post. I knew that orgeat was a key ingredient in making a proper Trader Vic’s Mai Tai, but I had no idea that it was used as a milk substitute.

When I first started studying mixology, I was unable to find orgeat syrup locally, so it would’ve been very handy to have this recipe back then. With the proliferation of gourmet coffee outlets in recent years, it’s become much easier to purchase.

Thanks for this post, it’s excellent. I used sliced blanched almonds from Trader Joe’s, and (not being a very patient person) simmered the almonds around 125 degrees for 15 – 20 minutes, which I repeated three times. The syrup came out velvety and flavorful. I added a bit of OFW and some cognac to stabilize. Thanks!

Orgeat used to be made with barley. The french word for barley is “orge”. Hence, “orgeat”.

Coul I just use store-bought organic almond milk instead of making my own? You can purchase sugar free as well… (?)