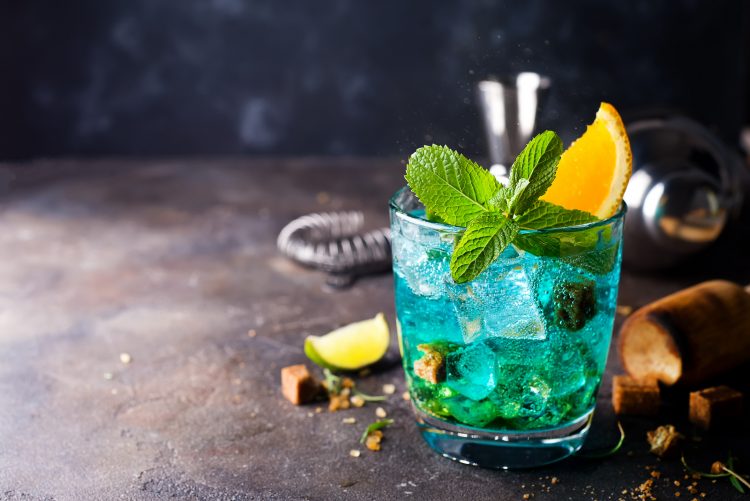 Envisioning the blue shades of a tropical island lagoon, or a natural hot spring in Iceland, or possibly the 1980s movie with Brooke Shields, can make a person relaxed and the only compliment to a relaxed attitude is an unpretentious tropical cocktail. This is a perfect example of when you should enjoy an easy to make Blue Lagoon.

This is a cocktail that follows the common pattern of the traditional homemade Bajan punch; “One of Sour (lemon/lime juice), Two of Sweet (simple syrup), Three of Strong (rum/vodka), Four of Weak (ice/dilution).” The use of Blue Curacao is the key selling point, with its attractive blue colour, it is both appealing and oddly unnatural.

The history of the drink is fairly simple, it starts off with the simple plot device of two people being stranded on a tropical island in the 1908 book entitled Blue Lagoon. The book spawned a number of films in the 1930s and 1940s that had a tropical theme and in publications the mention of “blue lagoon” was frequent. In May 1949 the Globe & Mail published a story titled: “The Blue Lagoon A Tale of Love Amid Coconuts” with the quip “this may sound like one of the new cocktail bars but it is a film…”.

The drink seems to have been part of a promotion for the 1980s Brooke Shields version of the movie. In the June 23rd, 1980 edition of the Los Angeles Times an article (PARTIES: PARKING LOT BECOMES A ‘PARADISE’) mentions rum drinks being tinted with blue food colouring and calling them Blue Lagoons.

Though most recipes seem to call for vodka, any self-respecting tropical drink should include rum. A light rum, like Bacardi, will work perfectly in this cocktail but if you want vodka, go for it. And always stir this drink, it should be crystal clear just like its namesake body of water.

If you want the best version of this drink, avoid sour mix, it just can't compete with fresh lemon juice. You can vary the sweetness by using less simple syrup. And many recipes call for vodka, but white rum is a better option.


Amount Per Serving:Calories: 189Total Fat: 0gSodium: 0mg
This drink may not wow you, as it tastes like alcoholic lemonade, but it is still pleasant and easy drinking.