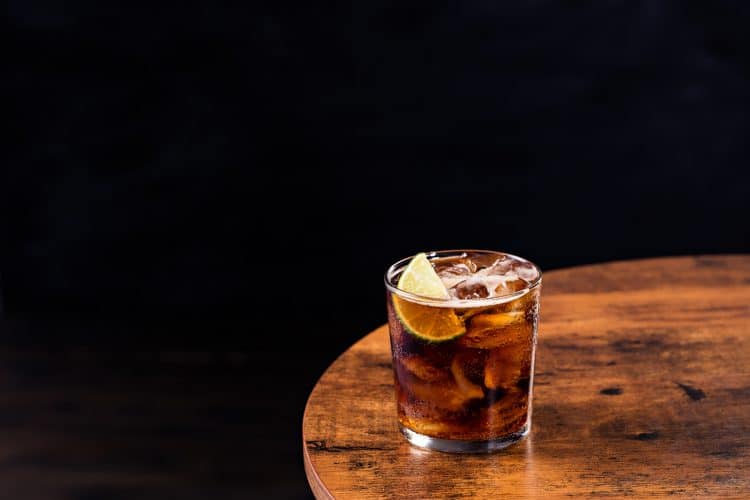 The Internet is quickly becoming the place for highbrow cocktail culture. As a group discussion on the use of rare ingredients, which most bartenders have never heard of, or the nuances of a cocktail created in 1933 is not uncommon and may be the norm. So, very rarely are discussions of basic drinks brought up. Part of the goal of the Art of Drink is to improve bartending, and drinks, as a whole, not just at the elite level. This requires that I tackle some of the most fundamental topics that, theoretically, shouldn’t even require discussion. But these basic issues do need discussion because when I go to a bar and order a rum and coke, I really shouldn’t leave disappointed. It’s not like I asked for a Ramos Gin Fizz.

There isn't a proper ration for this drink, it solely depends on what you like.

When cutting a lime wedge for a rum and Coke use 1/6th of a lime. If you want to really give it a boost, try 1.4 of a lime. Extra lime really helps this drink, but should always be in balance with the rum and sweetness of the Coke.

8 oz
Amount Per Serving: Calories: 230
As someone who has spent a lot of time in scientific research, I have come to realize that most research is done on very, very basic principals. Scientists never tackle the big picture; they put the big picture together like a giant jigsaw puzzle. Sure, at the end of the day the discoveries and technologies that are made look very impressive, but they are built up from tens of thousands of very small building blocks. Each additional block is an incremental improvement in the previous invention or understanding. The same thing can be said about cocktails.

In the early ages of distillation, we had a base spirit, which probably tasted like crap. Then some genius squeezed some fruit juice into it, and voila, the first cocktail. Distillation was the hard part, adding juice was the incremental improvement.

Early cocktails were simple concoctions, usually consisting of spirit, sugar, and bitters. Eventually, other ingredients were added as incremental improvements. Some cocktails got out of hand with the “additions” and others were refined to what they are today. But, the fact is that for any cocktail to be excellent, you need to get all the little blocks right. This rule seems to apply to many things.

For a simple Rum and Coke (Cuba Libre style), the building blocks are 10 oz glass, Coca-Cola, rum, ice, and lime. The classic recipe calls for a ratio of 1 part rum to 2 part Coca-Cola. A Rum & Coke ratio of 1:3 might be more palatable to modern tastes. For limes, I usually cut a wedge that is a sixth of a lime. Many bar owners will make you do eighths, which isn’t bad, but anything below that isn’t worth the effort. Simplicity at its finest. Sounds easy enough to make, but sometimes in the haste of a busy bar, bartenders will not add enough ice, or forget the lime or even pick a poor rum. That’s when you should realize that the bar only cares about making money, not making the customer happy. Well, unless you count the artificial happiness that alcohol provides.

Really, who has tested which rum makes a good, non-call brand, rum, and Coke? I’ll bet most bartenders just use what is on the rail, and whatever is on the rail is pretty much based on price (i.e. whatever is cheapest). Since I’ve been guilty of just pouring whatever the appointed house rum is, I’m going to take a deeper look at what makes a good rum and coke. I’m going to use Appleton rums as my comparison point since they have a wide range that would help quality vs. price arguments. The candidates are Appleton VX, Appleton White, and Appleton Special Gold.

What is the point you may ask? It’s just a rum and Coke and who really cares? Well, I do. If someone comes into a bar and orders a simple drink, and it sucks, why would that person even attempt to move up the list to a more complicated cocktail? They are more likely just to order a beer or glass of wine. If you make a good basic drink, people will trust you just a bit more and may choose to order something more exciting. That’s when it becomes fun to be a bartender.

22 Comments on Rum and Coke

Very refreshing post. I agree it’s a good idea to subject even simple drinks to analysis and good ingredients. The staple where I’m from is Rye and Coke rather than rum, but I’ve noticed that this, too, is better with premium rye than with discount.

When I enter a ‘strange’ bar, I order something simple to see what quality they are pouring and how. I cant tell you how many bars I have been in that have so thoroughly screwed up a basic drink that I have left the bar after one drink. Some bars so mangled a Rum and Coke that I have abandoned the drink and simply left.

But! Can I use Dr. Pepper instead? I don’t really like Coke that much…..

This was a great post. There are so many cocktails out there with multiple types of alcohol, mixers etc. I am a very simple cocktail drinker and Rum and Coke is my favorite. I love Captain Morgan and Coke but will drink other Rums as well. Many bartenders think they are “doing you a favor” by filling the glass with Rum and adding a “dash” of Coke. Wrong!!
The correct measurements make a great drink.

I’ve been having a very interesting email exchange with another gentleman concerning the Rum & Coke. One big part of the discussion has been concerning the US Coke made with the disgusting High Fructose Corn Syrup versus Coke made with cane sugar as the sweetener. The cane sugar Coke is made in most countries other than the US – do you have it in Canada? I’m told that Coke produces a cane sugar version for Passover for US consumption… I may have a hard time finding cane sugar Coke until then.

Great post! I make a rum & coke for myself fairly frequently, and I think half the reason I keep coming back to it is the variety of rums. I love experimenting with white vs. gold vs. dark and working my way through different brands.

Also, having someone like Scott (above) handy is a big help 😉

Oh my god! Mount Gay Extra Old rum makes THE BEST rum and coke ever. The rum itself is very smooth and has a bit of a molasses taste to it, but there’s something about putting it in coke that brings out an incredible, unmasked vanilla flavor. Another great post!

Coca-Cola really have a strong flavor so a really tasty rhum would go better with it IMO.

Allow me to echo the kudos from others! Great topic, and I have been more than once the victim of a poor rum and Coke. Something that should be so easy…

Love the selection of rums too…Appleton V/X is one of my favorites to use in R&C’s, with Sailor Jerry Spiced being the other (the cherry finish on it is rather nice in Coke).

I didn’t knew there was such things has “Original Dublin Dr.Pepper” and im really sorry if I misrepresented it.

OK now after some research :

Much of the soft drink industry in the United States stopped using sugar in the 1980s, in response to a series of price supports and import quotas introduced beginning in 1982 that increased the price of sugar above the global market price. As a result, most U.S. soft drinks, including Dr Pepper, now use high fructose corn syrup instead of sugar.

I’ve never heard about it before 😉

I was talking about the “normal” Dr.Pepper and even in that case I never said it was bad or anything, it was only a suggestion for a new use for the Angostura Bitter!

I don’t have to tell the difference between fresh squeeze juice over sour mix or anything like that… I think the same principle apply to the Dr.Pepper.

I’ll definitely agree with Axefire’s comment on Sailor Jerry’s. Some of my friends do out of state runs (can’t find Sailor Jerrys in Alabama because of our crazy laws) and buy a case or two at a time from our favorite Mississippi package store just because it goes so well in coke.

Ok actually my favourite is my Havana Club Barrel Proof, but because I can’t rebuy it when I’m done with the bottle, I have to savour it!

One little detail though, not all rum & coke is called Cuba Libre. This is a name reserved for the preparation when made with Bacardi rum. The drink was invented during the Spanish-American War in the late 1800’s by mixing Coca-Cola and Bacardi rum.

For a true Cuba Libre, the rum has to be Bacardi and the cola has to be Coca-Cola.

Like Kevin, I remember I used to use a bottle of Bacardi 8 for Rum and Coke… it turned out pretty good.

I usually specify which rum I want in a rum and coke, for instance, I would say captain and coke for captain morgan or Bacardi and coke etc…

I agree that the quality of rum is paramount (Mount Gay is what I usually use), but I’d stick to the light rums instead of the dark ones – they just seem to go better with Coke.
It used to be that Coke smuggled from Mexico was made with sugar. The Coca-Cola company and distributors hate the practice because it busts their regional-distribution monopolies, but I hear they recently settled the disputes (and suits).
Perhaps coincidentally (I’m too cynical to believe it), I recently picked up a bottle (yes they still use glass which be another reason) that had Hecho in Mexico printed on it, but was made with HFCS instead of cane sugar! I hope this isn’t a sign of the future. #(

Annoying is the customer who orders “rum and coke” standard answer is “white or dark?” I live in Australia, close to the New South Wales and Queensland borders. The northerners (QLD) drink dark, the southerners (NSW) drink is usually white(mostly) The dark rum of choice is a villainous icky thing called Bundaberg (Bundy affectionately)

I don’t carry Bundaberg. I do keep an organic called kinky nero, and Appletons, mt gay and a host of white rums too. Life is too short to drink bad rum