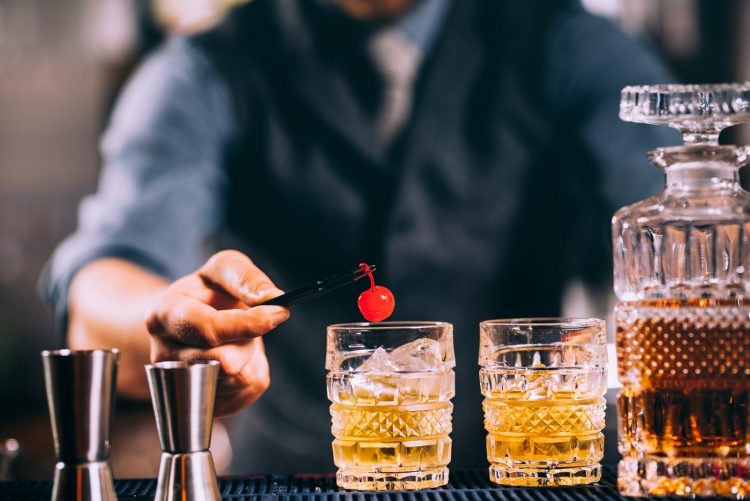 As much as the maraschino cherry is reviled by professional bartenders, it is lovingly embraced by the consumers of sundaes and artificially flavoured fruit “martinis”. Why do people love the artificial variety? Aside from the brilliant red colour, the cherries remain plump like a cherry should be, and not shriveled like the head of a 105 year old person. Oddly, a portion of my part-time lab job involves processing samples with the intended goal of keeping the morphology of said samples similar to the original. So after reading this post you will learn a few things about making maraschino and cocktail cherries, as well as learning a bit about histology.

Shrinkage, the phenomenon that has plagued man since the dawn of time, is a key issue in creating good cocktail cherries as well as producing proper histological data. In both cases, deviation from the natural appearance from processing can result in poor acceptance. Basically, if the final product is ugly looking, nobody will like it.

So what is histology? Histology is the process of studying the cells of plants and animals. This is done by sectioning ultra-thin slices of the tissue, between 4 and 10 microns thick, mounting them on a glass slide and then staining them with chemicals and dyes to make certain parts of the anatomy easier to identify.

Next obvious question: What does this have to do with cherries? As I mentioned in the introduction, keeping the morphology (i.e. the structure) of the cells and tissue close to the original state is very important, even though we’ve treated the tissue with chemicals which does have a negative effect. If the preparation of the sample is bad, a pathologist may view this as diseased tissue, which could lead to a misdiagnosis. So, some of the techniques used to keep cell structures intact can be applied to cherries, so they don’t look wrinkled and unappealing.

For example, we use a lot of alcohol in histology, but it is rarely ever used to “fix” tissues by itself. The reason is that alcohol causes the sample to shrivel up. Ditto for those who have tried to preserve cherries in brandy or another alcohol base. This isn’t to say that we can’t add alcohol to a cocktail or maraschino cherries, but we need to understand the process and do a few things first.

The key factors in fixing a cherry are as follows:

Acidity and pH
Anytime you manipulate something you want to try and maintain the natural conditions, such as pH. Cherries have a pH of about 3.5, and the key acids in a cherry are citric and malic acid which accounts for 94% of the total acid. Malic and citric acid occur in roughly equal concentrations, but the flavour of malic acid is more closely associated with the flavour of a cherry. Because of this, I would recommend using more malic acid when we get around to creating our Cherry Fixative Solution.

Acidity also helps fix the colour of the fruit so those bright reds don’t turn into gag worthy brown.

Osmolarity
The sugar content of cherries can range from 55 g/L for sour cherries to 160 g/L for sweet varieties. Glucose and fructose comprise 99% of the sugars in a cherry, in a ratio of roughly 1:1.

Volume
The volume of fixative, or in our case sugar solution, is important. In a histology lab, the general ratio is 20 parts fixative to 1 part sample. This is way too high for our purposes, but what it means is that you want enough sugar solution to avoid major fluctuations in the sugar concentrations caused by the addition of the cherries. We often don’t realize that when we stuff a jar full or cherries, there is a greater volume of cherries compared to the syrup we add. At the very least there should be an equal volume of syrup and cherries.

Temperature
Increasing the temperature helps to preserve the fruit better, as well as pasteurize the fruit. The elevated temperature speeds up the process. You don’t need to boil the fruit, as that would cook it creating different flavours. If you blanche the fruit in a 10% sugar syrup at 72°C (160°F) for one to two minutes, this would be sufficient.

This step is optional, but if you are serving these cherries at a bar it is a good idea since it will kill any bacteria or mould on the fruit.

Stages
In a histology lab, processing of the samples is done in “steps” where the concentration of solutions is gradually changed over a period of time. This eases the transition from low concentration to higher concentrations of fixative and prevents cells from becoming disfigured. The same thing applies to preserved cherries.

Firmness
As with size, firmness is an important factor to consider. Mushy is not a complimentary term in this context.

Since effort and expediency are important to the do-it-yourselfer there are better options than calcium hydroxide. Calcium phosphates are well known in the food industry as firming agents, but where would you find calcium phosphate?

It just happens that Acid Phosphate has a significant amount of calcium phosphate in it, as well as potassium and magnesium phosphate which help with firmness and buffer the pH. Less you think this is crass self-promotion, I actually pulled this information from a patent on preserving cherries (see references).

“If the cherries being stored are intended to be converted to garnish cherries, where it is desirable to have additional firmness in the cherry, trace amounts of a calcium salt, such as dicalcium phosphate may be included. Such a material is recognized in the art as producing firmness or hardness to the cherry product. Ordinarily no more than amount 0.03 parts of the calcium salt would be added to a solution having 100 parts water. ”

Serendipity is a sweet lady and yes Acid Phosphate is a miracle product.

So with all of this information how exactly does one preserve a cherry so that it actually resembles one afterwards? This is what I would do:

The concentration of acid can vary depending on the fruit. You can always add more acid if you find the cherries come out too sweet, or visa versa. Also, remember that a low pH (less than 3.5) helps preserve the fruit and prevents bacterial growth.

In a glass container combine the cherries with the solution and place it in a refrigerator for a week or so. If you intend to make maraschino/cocktail garnish cherries, the sugar content needs to be higher, approaching 45% to 50%. You will still need to start with the above solution, but after a few days, you can start adding more concentrated simple syrup. Leave a little room at the top of your jar for the additional simple syrup.

If you create a 2:1 simple syrup it will contain about 1.3 grams of sugar per millilitre. If you add 100 ml of this to your cherry solution, to every quart of Cherry Fixative Solution, it will increase the sugar concentration from 30% to 38%. Allow this to stand for a day or two, give them a taste and then if need be, add another 100 ml of 2:1 simple syrup which will bring the sugar concentration to 45%.

Once the cherries have achieved the desired sugar concentration and firmness, you can now add some alcohol. Maraschino would be the obvious choice, but any spirit or liqueur will do. Simply remove a quantity of the syrup (no more than ¼) and replace with the liqueur.

What’s that, you don’t have access to Maraschino? Here’s a housewife recipe for homemade Maraschino from 1898.

Dissolve the sugar in the water and then combine all the ingredients in a tightly sealed crock. Let sit for a fortnight, shaking once every 24 hours. At the end of 15 days thoroughly stir the mixture and then allow to settle for 24 hours. Strain through a cloth and bottle. Allow the bottles to stand for a few days before using.

So there you have it, you can now make your own cocktail cherries. What? Cherry season is over and you can’t get fresh cherries anymore, that sucks. Not to worry, I have a solution. You can apply the same technique to cranberries. That’s right, we no longer need to serve inedible cranberry garnishes on cocktails that just end up going into the dumpster. The only thing you need to do is pierce the skin of the cranberry multiple times with a large needle or ice pick. Because cranberries are tougher than cherries, the process takes a bit longer, but it is well worth it. Increasing the blanching time will also help move the process along.

Thanks go out to Marcel van der Ben for asking the question that compelled me to write this post. If you liked this post, feel free to spread the word (Twitter, Facebook, linkage, etc.).