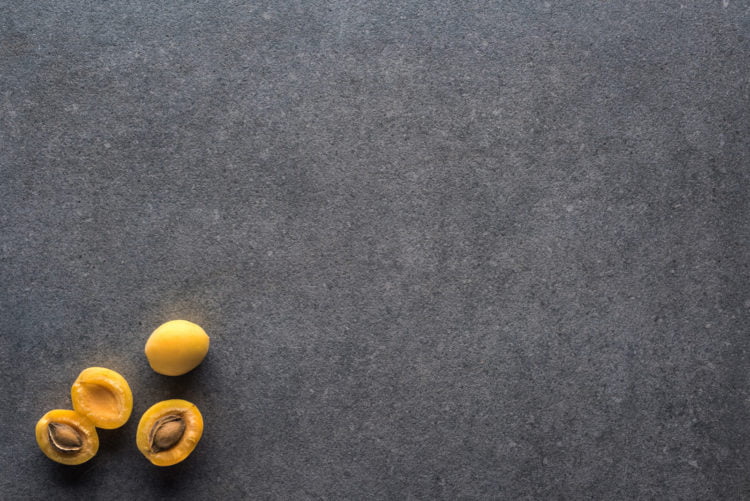 Even before I wrote the maraschino cherry post, some people had asked me whether the quantity of cyanide in fruit pits/stones (apricot, peach, plum, cherry, etc.) was significant enough to harm someone and whether there was a way to remove the cyanide from the kernels. Since the world has a fascination with deadly ingredients, let’s talk about the toxicity of fruit kernels, whether there is any method to remove the toxic cyanide and bust some myths with science.

First, let’s get everyone up to speed on what is being discussed and dissected. The cyanide in stone fruit isn’t in a free state; it is part of another molecule called amygdalin, which on its own is harmless. When the kernels are crushed or chewed the amygdalin is released–which isn’t a big deal, except that certain enzymes like beta-d-glucosidase can also be released. This enzyme cleaves (breaks down) the amygdalin into glucose, benzaldehyde and hydrogen cyanide (HCN). If the beta-d-glucosidase enzyme isn’t present in the fruit, it can be found in your intestinal tract, so there’s no way to avoid the enzymatic decomposition of amygdalin and the release of hydrogen cyanide.

Is there enough cyanide in apricot and cherry kernels to cause harm? Obviously, this isn’t a black and white issue since there are people who claim eating these kernels is healthy. We’ll talk about those lunatics later, first, let’s figure out some toxicity data.

How Toxic is Cyanide?

If we’ve learned anything from movies we’ve learned that cyanide is toxic. And of course, it is very toxic. During the Great War the French started using prussic acid (hydrogen cyanide) in artillery shells and during World War II is was infamously known as “Zyklon B.”

Cyanide kills by interfering with the body’s ability to utilize oxygen at the cellular level. The lowest known adult fatal dose of hydrogen cyanide was estimated to be 50 milligrams. Why estimated? Because nobody has ever volunteered to be a test subject for the fatal cyanide administration protocol. But occasionally, people who eat too many apricot kernels will take a trip to the local emergency room to get treated for cyanide poisoning. Some survive and we can back-calculate the cyanide levels from how many apricot kernels they ate.

So how much is 50 mg of hydrogen cyanide? Glad you asked, get your thinking cap and a chemistry textbook (you won’t need it, but it will make you feel cool) we’re going to look at this from a different angle.

Do you remember Avogadro’s number? You know 6.022 x 1023, which is a 6 followed by 23 zeros (insert joke about US debt). For reference, a US trillion (billion in the EU) has 12 zeros after it. The sexier way to say Avogadro’s number is 602.2 sextillion, yes sextillion is a legit numerical unit. This number is the number of molecules found in one mole of a substance. What’s a mole? Oh dear. Okay, 602.2 sextillion cocktail cherries are one mole, and 602.2 sextillion of anything is one mole. Why that number? Because the chemistry gods said so.

Moving on, we can take a mole and convert it into a weight using the substances molar mass. No questions, just read your chemistry book or Google it. Hydrogen cyanide (HCN) has a molar mass of 27.025 grams which means there are 602.2 sextillion molecules of HCN in 27.025 grams of HCN.

Now we’re going to find out how many molecules there are in 50 mg of HCN. The easy way is to divide 50 mg by the molar mass of HCN in milligrams, by taking the grams and multiplying them by 1000 to get 27,025 mg and that will give us the number of moles in 50 mg of HCN. Then we take Avogadro’s number and multiply it by the moles of HCN (0.00185 or roughly 2/1000th’s of a mole) which gives us roughly 1.11 sextillion HCN molecules.

So why all the annoying math? Watch.

It is estimated that the average human body contains 50 to 100 trillion cells (billion in the EU). Since the world is rapidly becoming overweight, we’ll use 100 trillion cells for this calculation. Since we know from our earlier calculation that 50 mg of HCN contains 1.11 sextillion molecules, we can now calculate how many HCN molecules per cell in our body is fatal.

That’s right, it takes millions of HCN molecules per cell to kill you, and most likely 11 million HCN molecules/cell wouldn’t be fatal for most people, but it would make you seriously sick. Looking back at the tobacco in cocktails post, in a molecule to molecule fight, nicotine is six times more toxic than HCN on the molecular level. The rough molecular toxicity calculations work out to about 1.8 million molecules of nicotine per cell.

Those numbers may seem high, but there are other factors like absorption and reaction rates with other molecules. But really, the human body is pretty resilient thanks to the processing power of our liver. That doesn’t mean we can abuse it. Most studies show that 5 mg of hydrogen cyanide spread out over a day can be detoxified by our liver without a problem. Once a person starts to approach 10 mg per day, symptoms of cyanide exposure may become apparent, if not in the short term, they will be in the long term.

So, how much cyanide does an apricot, peach or cherry kernel contain?

A typical apricot kernel weights about 0.6 grams and studies have shown that on average one kernel contains 1.8 milligrams of cyanide (3 mg/g), but it can vary depending on the species, growing conditions, etc. Here are the HCN ranges:

So if you have a case of the suicidal munchies, 30 apricot kernels will be the starting point to get you looking down the tunnel towards the light. Thirty kernels probably won’t kill you, but you’ll be in a very bad state where you’ll most likely be vomiting and hyperventilate with abdominal pains as you slowly suffocate which will cause you a great deal of anxiety.

Even though I’ve had this question sometimes, a recent email compelled me to put up this post. The message asked whether the following liqueur was safe. The liqueur contained 500 grams of cherry kernels in 1 litre of brandy.

Personally, I wouldn’t feel comfortable with this liqueur around. If someone unknowingly took a shot of this, they would be in a world of hurt. Again, they probably won’t die, but it won’t be fun. And of course, if pain and suffering aren’t enough, think of the legal liability of having this stuff around in a bar. I still stand by the fact that I can’t get a properly made Manhattan in most places, so arming a bartender with toxic liqueurs kind of worries me.

That’s part one of this two-part series on “cyanide in cocktails”. Part two will discuss whether it is possible to remove the hydrogen cyanide from stone fruit maceration and I’ll go on a little rant about the advocates for amygdalin/laetrile and some of the detrimental effects of cyanide.

Don’t forget to spread the word and retweet or link to this post. It keeps me motivated.