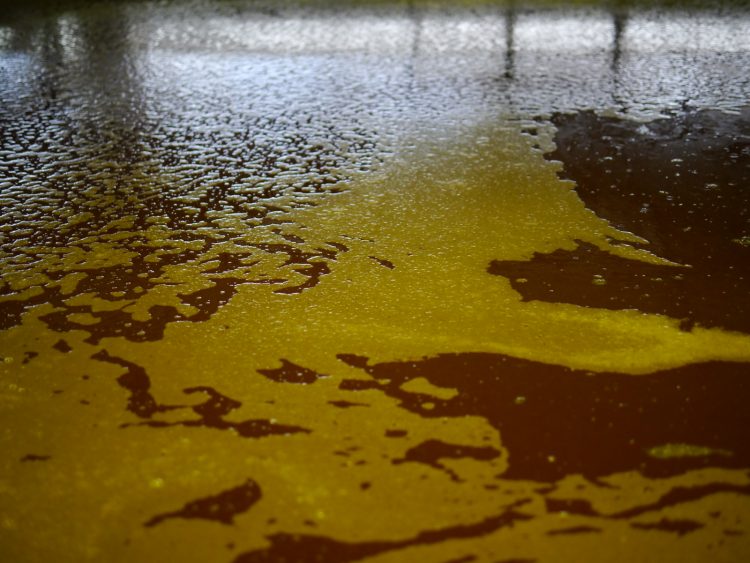 This article is a short summary of the process of creating distilled spirits. The key point in the distillation of any spirit is to collect the fraction that contains the ethanol and the flavour components while avoiding the collection of the methanol and other not so tasty molecules. The picture above is a vat fermenting molasses at the Cruzan Distillery in the US Virgin Islands.

Many readers know that I originally studied chemistry and a big part of that diploma was engineering and process control, including distillation column design. Sorry, no pot still design was covered, but the principal, not the flavour, is the same. Now, the fun part about distillation is the end product when making spirits. The not-so-fun part about distillation is all the calculations! In school math was never one of my strong points, it was always analytical chemistry, so engineering calculations gave me a headache. But I managed to make my way through the courses and now the knowledge is finally becoming useful. For anyone interested in getting in-depth with a distillation column you can pick up a copy of “Unit Operations of Chemical Engineering 4th Edition”. Check out Section 4 on Mass Transfer and Its Applications Subsection 18: Distillation starting on page 471. I don’t recommend it, but here’s the ISBN for those that need a cure for insomnia or want to learn how to procrastinate (0-07-044828-0 ). For this article, I’m going to stick with the very basics and eventually I’ll expand on it if there are more questions. If you have a question about this article, just post a comment.

Anyway, the basics of distillation are pretty simple. I’ll use rum as an example since that was what the questions specified. To start you need to ferment the molasses. For proper fermentation, you need to reduce the sugar content of the molasses by adding water to make a more manageable starting material for the yeast. The high sugar content can inhibit the yeast from producing ethanol. The basic starting concentration should be less than 25% weight percent sugar (Brix). If the molasses is 50% sugar, you just need to add an equal amount of water to bring the sugar concentration down to 25%. You can buy large quantities of molasses at farm supply stores; livestock love it.

Once you’ve fermented the molasses you’ve created ethanol (generic term: alcohol). The problem with fermentation is that it produces other undesirable byproducts like methanol and ketones, which can be poisonous. To separate the ethanol, methanol and water, among other things, you need to distill it properly. This is the most important step to making any spirit, both for taste and safety. The trick is to use a good accurate thermometer or thermocouple. With accurate temperature measurement it allows the distiller to collect a very specific range, usually called a “fraction”, that contains the desirable components (i.e. ethanol plus flavour). The key is not to collect the methanol, which comes off the top of the distillation column (or pot) at around 64°C to 65°C.

The fraction you want to collect is between two temperature points. For rum production, you want to obtain the part that comes off the still between 76°C and 83°C for light rum. Ethanol boils at 78.4°C, so it will sit at this temperature for a while before it starts to increase, but once the temperature begins to rise again you will want to watch very carefully and shut off the heat source once you approach the 82 to 83°C range. If you want a more flavourful rum you can collect everything up until about 90°C (the tails). Remember, don’t keep anything that came off the still below a temperature of 76°C, it is bad stuff.

That’s the basics of distillation for white rum. If you want amber or dark rum, you need to barrel age it and/or add molasses in the case of dark rum. And if you just want to drink it, basic rum goes great in a Rum & Coke.