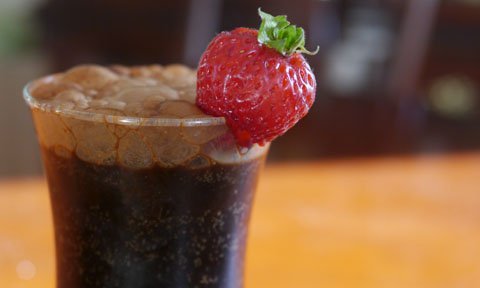 The Phosphate was the defining category of drink during the soda fountains golden era (1875 to 1906) and the Wild Cherry Phosphate was the most popular, but not far behind in popularity was the Chocolate Phosphate. That’s right, chocolate soda. This wasn’t an egg cream or chocolate milkshake this was a carbonated drink that combined a chocolate syrup with acid phosphate to create a very appealing drink. It’s also low-fat and even moderately healthy with all those chocolate flavonoids and antioxidants. Curious?

At first, the idea of a chocolate soda might not sound that tempting, but like anything, it is all in how you make it. Using cheap ingredients—like grocery store chocolate syrup—is setting yourself up for disappointment. And as the name states, it is a phosphate so you can’t substitute citric acid as these two acids are distinctly different and make a significant difference in the taste of the drink.

The Broma process is a method used to remove cocoa butter from cocoa mass, leaving cocoa solids (cocoa powder). Around 1865 the Domingo Ghirardelli factory discovered that by hanging a bag of cocoa mass (ground cacao beans) in a warm room, the cocoa butter would drip off, leaving behind a residue that can then be processed into cocoa powder.
More cocoa butter (fat) is extracted by using the Broma process than using a hydraulic press, and less fat remaining in the cocoa (powder) makes it easier to dissolve the cocoa into liquids. Broma process cocoa also has a more intense flavor than Dutch process cocoa, as no alkalis are added to the cocoa.

Next, you need soda water, not just carbonated water. Have you ever tried dark chocolate with sea salt? It is a very tasty combination. Many chocolate syrup recipes call for the addition of a small amount of salt as well to enhance the flavour. The &quot;soda&quot; in soda water refers to salts like sodium which will serve our purpose. If you can’t find a proper soda water, use a mineral water instead. The carbonation level might not be the same, but if you have a soda syphon you can fix that.

To give your mineral water a carbon dioxide kick take your well-refrigerated mineral water and add it to the syphon. Charge it as per the operating instructions, and allow to chill in the fridge for another hour or so. This method double charges your water to give it that pungent kick.

Finally, you need Acid Phosphate. Sorry, there is no way around it, a phosphate is a phosphate because of this particular ingredient. The characteristics that make this acid work so well is that it has a pure sour flavour. Citric acid has a distinctly fruity tang that doesn’t work as well with the savoury characteristic of cocoa powder. Additionally, Acid Phosphate has a variety of salts (calcium, magnesium and potassium) that provide flavour enhancing properties to your chocolate soda.

Heat 1 cup of fountain syrup to boiling and add the cocoa powder allowing to boil for 1 minute while stirring. Add another cup of syrup and continue stirring until it reaches a boil. Boil for 1 minute and then add the remainder of the syrup and heat to boiling and then remove from heat. Allow to cool and then add the cinnamon and vanilla. To give a darker colour to the drink add some caramel colouring.

If you find that the syrup separates, you can add a small amount of gelatin to the mixture. Bringing it to a boil with stirring or hitting it with a stick blender will emulsify the syrup.

The good thing about this recipe s that you have lots of room to experiment. You can reduce the sugar content and up the cocoa for a more intense syrup. The cinnamon and vanilla were pretty common, but any extract can be used. Some recipes called for clove or orange oil. The trick to using flavouring oils is to use them in very small quantities.

To properly serve a phosphate take a 12-ounce glass, add the acid phosphate and add the soda water to the ¾ mark. Add the chocolate syrup slowly to avoid spilling over. Stir gently with a spoon to mix and serve immediately.

When you think of chocolate, acidity isn’t the first thing that comes to mind. Smooth, creamy, sweet or decadent are the usual tasting notes, not the Chocolate Phosphate. The chocolate flavour is very much present, but the acidity and carbonation do an excellent job of balancing the chocolate flavour. The sweetness is well balanced and the cocoa powder adds a subtle, but pleasant bitterness.

For the sake of comparison, I decided to try a Chocolate Lactart. One of the characteristics of Lactart is that it has a “drying” acidity. It makes things have a dry wine quality to them. So how does it work in a chocolate soda?

Given a choice, I would order the Chocolate Lactart. Where the phosphate has a bright chocolate flavour, the Lactart version seems to be more integrated with a pleasant sourness and a dry chocolate flavour. The finish is extremely clean, with only a subtly pleasant chocolate flavour and the palate cleansing acidity of the Lactart. It is hard to describe, but an acidic chocolate wine comes to mind. Seriously, that’s what my brain told my fingers to type. Ever eat salmon while drinking a fine dry champagne? That palate cleansing acidity is what the Lactart brings to the drink. The Chocolate Lactart is actually a drink you could enjoy while eating chocolate and it wouldn’t be over the top.

Lactart may not have the star power of Acid Phosphate, but it is an exceptional ingredient to use in a cocktail. Especially for those who believe, as I do, that most drinks are just too sweet.

Overall, both the Chocolate Phosphate and Lactart are solid drinks for those who want a non-alcoholic drink or have a hankering for chocolate. If you want something more refreshing, try a Lemon Soda, the most popular, non-phosphate, soda during the 1800s. There are more recipes for chocolate and other phosphates in my book: Fix the Pumps. 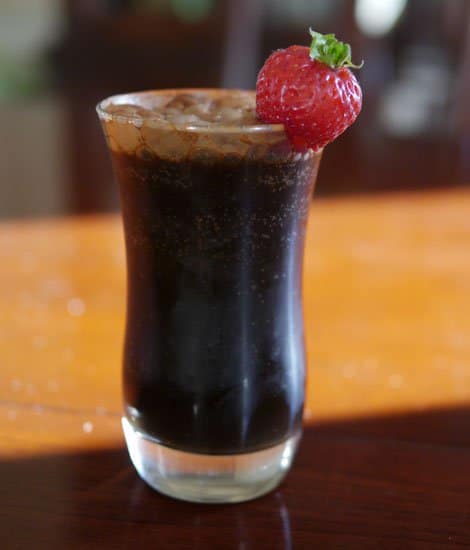