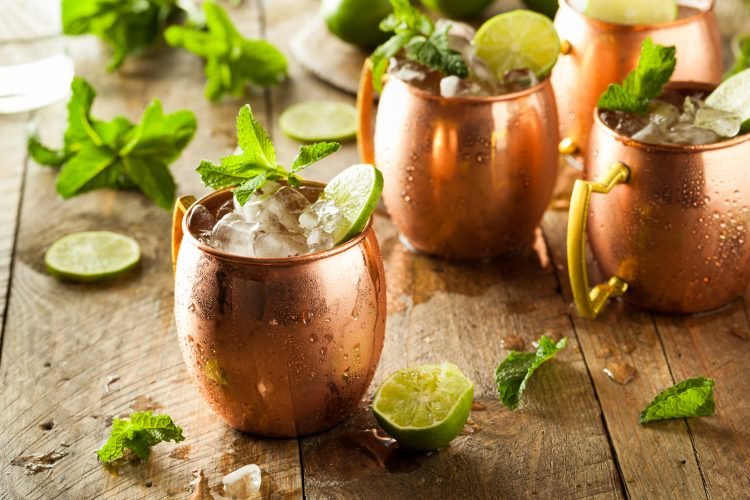 If you want to blame one particular drink for the rapid growth of vodka, in North America, look no further than the Moscow Mule. It’s true that the Vodka Martini became the most popular vodka drink initially and spurred the premium vodka category, but it was the Moscow Mule that began the introduction of North Americans to vodka. Whether vodka is the greatest spirit ever or the bane of bartenders, that’s for you to decide, but the Moscow Mule may be the drink that trumps the Vodka Martini when it comes to flavour.

The history of the Moscow Mule goes back to 1941 and was invented by John G. Martin of Heublein, Inc., of East Coast spirits, and Jack Morgan, owner of the Cock ’n’ Bull Tavern, a bar on the Sunset Strip in Los Angeles. As the story goes, John had recently acquired the right to sell Smirnoff vodka in the US and Jack had a surplus of ginger beer at his establishment. Voila, they now have a new drink. Eventually, John Martin used the Moscow Mule to help promote vodka to bars across the US and this helped fuel the mainstream acceptance of vodka as the preferred white spirit, replacing gin.

The other gimmick that was used to market the Moscow Mule was to serve it in a copper mug. The reason for this isn’t really known, but like anything, making something stand out from the crowd tends to help sales. With time and the bad habit of people collecting (i.e. stealing) glassware from bars and restaurants as souvenirs, the copper mug is a thing of the past, much like the silver julep cup.

The copper mug was a gimmick used by the creators of this drink to move some excess mug inventory. However, the ascetics have made the drink memorable so it has now become a tradition to serve a proper Moscow Mule in a copper mug.

Taste: When you use real ginger beer this drink has a spicy edge. Think about licking a piece of fresh cut ginger root. It also has a lot of citrus flavours from the lime which compliments the ginger beer. Please note that ginger ale will not work in the Moscow Mule. It is too mild to give the drink its spicy character.

The Moscow Mule isn’t a complicated drink, especially with the use of vodka as the spirit, but it is still pleasant on a hot summer day. Also, this is a good drink to demonstrate how bitters can make a difference when it comes to flavours. Without them, the drink seems to be missing something. Once you add the bitters the drink has more depth of flavour. If you have some vodka you want to finish off and demonstrate to someone that a dash of bitters does make a difference, try a Moscow Mule.