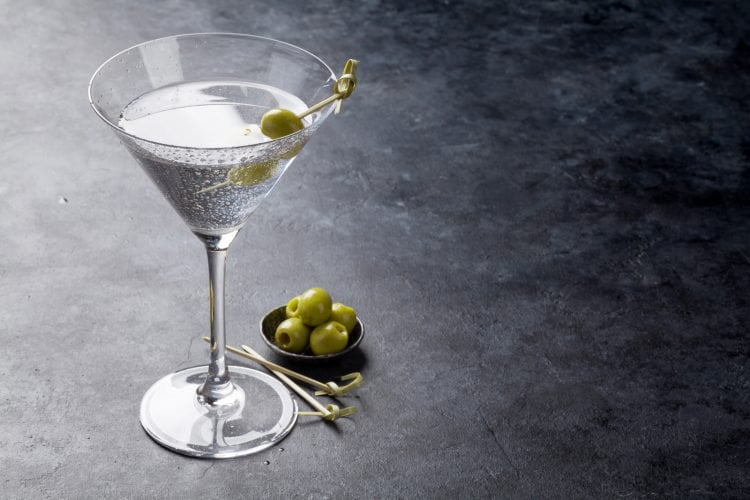 Why do people order dry vodka martinis? Is it because they don’t know what else to order? Is it the herding effect? Or do people actually think they taste good? This is as much a study in psychology as it is in drinking trends. Remember the term “monkey see, monkey do”, that’s how I sometimes feel at the bar. People will order what others order, not because they necessarily know what they are getting, but because everyone else is doing it. This is how the vodka martini trend got started, and we could probably lay some blame on James Bond for this, but mostly “overstressed business people” who need a quick fix at lunch.

Theoretically, vodka shouldn’t have much in the way of flavour. We know it has more of a sensation (astringency) caused by the ethanol than a true flavour. Actually, ethanol in high concentrations can act as an anaesthetic by causing nerve endings to be overloaded, so it inhibits taste. There are trace amount of organic components that do provide some very small hints at flavour. But, if the names of these organic compounds were put on the bottle it would make people run for the hills because they would think they are being poisoned. People don’t want to believe that the stuff they put in their bodies is bad, they want to think it is pure and healthy. Vodka has this image of being pure ethanol and pure spring/iceberg/glacier/lake/etc. water. Almost every vodka bottle alludes to some form of “purity” factor. Reality, ethanol is a poison itself, a fun one, but a poison none the less.

I once got sucked into an infomercial that was selling some magical health food product on a Saturday afternoon. As the hostess waxed on about how great their product was, she looked over to the other sales dude and started acting horrified at the ingredients in a competitors product. Specifically, she started reading off a list of ingredients and came across d-alpha-tocopherol and said that she would never want to put that horrible sounding chemical in her body. Well based on her IQ, she probably never has, because d-alpha-tocopherol is Vitamin E. That’s right, Vitamin E, and without Vitamin E we would pretty much be dead or very nonfunctional human beings. I chuckled, changed the channel and probably started watching some Godzilla rerun or something. But it makes the point that people fear what they don’t know.

Same goes for a martini. People seem to fear the vermouth when in reality, vermouth is your friend. It is the vermouth that adds the flavour to a martini and not the vodka. But the “monkey see, monkey do” principle applies. Ordering a plain old martini was boring, so it became a dry martini, which sounded better and made the buyer look more “in the know.” Then the extra dry vodka martini became all the rage because it seemed sophisticated. The reality is that if you give an alcoholic a bottle of vodka, and jar of olives, this is about the same level of sophistication. Extra dry martinis are a joke that alcoholics use to indicate they aren’t interested in flavour, they just want their alcohol fix. But to avoid being seen as pathetic, they make up some unique, often funny, way to add the vermouth spirits to their glass, such as passing the vermouth bottle over the glass. Funny the first two times, but annoying as hell the 1000th time. Now the majority of people who enjoy a drink are not alcoholics, but they seem to follow this martini making trend, thinking that an experienced drinker must know better.

When I make a martini, I make it as traditional as possible. That includes a good splash of vermouth and an olive planted dead centre in the glass. While I’m behind the bar, I often get people sitting at the bar who order an extra dry vodka martini, and occasionally when I free pour the vermouth it doesn’t equate to a “mist” of vermouth, more like a ¼ ounce to ½ an ounce. Every single time the response is “this is the best martini I’ve had in a long time.” Hmmm, that is an interesting response.

Now I never intend to make a drink wrong, but using a pour spout, old habits and free pouring always puts more vermouth in the shaker than “misting” or “rinsing” the ice. The interesting part is that the people find these good, probably because they are balanced and have the alcohol dampened down. I get more returns of rye and coke because I used the wrong whisky than I ever do for adding too much vermouth to an extra dry vodka martini. Actually, I’ve never had a martini returned because it tasted like something. Maybe this means something, and I think it means that so many people have forgotten, or never even tried a real martini, that they don’t know what they are missing.

What is my point? Well, it is to go out and discover things and try stuff. Don’t be a nondescript zebra in the herd doing what everyone else is doing. If we all listened to the infomercial girl and panicked every time we saw the word d-alpha-tocopherol, we’d all be very, very unhealthy because of Vitamin E deficiency. Try a real martini, hell, give up on the vodka martini, find a good bartender and explore the cocktail world, there is a lot out there to discover.

The best Vodka Martini is a well chilled one, get it as cold as you can. Don't believe that an extra dry martini is better, vermouth definitely makes this cocktail better.