The milkshake is a ubiquitous drink, whether you call it by its original name or modern synonyms like a smoothie, protein shake or the more arcane cabinet. You can find them at every ice cream shop and most fast food restaurants like Burger King or Sonic. But what is the milkshake’s origin story?

In the golden era of the soda fountain (1870 to 1900), drink names and categories were well defined, unlike today. For example, a Shake and a Milk Shake were different creatures. There was also the upgraded Cream Shake that removed a portion of milk and added heavy cream. Then there was an Egg Cream, with cream and eggs, unlike the modern New York Egg Cream which is just milk soda, a downgraded version of the Cream Soda. The Egg Cream was definitely a rich milkshake-like concoction. As you can see, the passage of time has simplified things but also disconnected history.

Milk drinks have been around for as long as we could tame a cow. However, until refrigeration only rudimentary cooling systems—ice houses or ice delivery,—were available and that made storing fresh milk difficult. Most milk drinks were cooked or served hot. Drinking raw milk was known to be problematic in the unhygienic past due to contamination from Salmonella, E. coli, Listeria, Campylobacter. The first popular milk-based drinks were posset and syllabub, both going back to at least the 16th century, but probably much earlier. Flips and egg nog were famous as well, and as Jerry Thomas noted about Egg Nogg in 1862 “it has a popularity that is cosmopolitan” which is still true today.

Cold milk drinks with considerable antiquity include Milk Punch and White Tiger’s Milk, both used fresh milk and lots of ice and were included in Jerry Thomas’ 1862 bar book but they were alcohol flavoured milk drinks, not milkshakes.

The first reference to the term that we understand today as a milkshake was in the Atlanta Constitution with the title “Milk Shake” published on May 17, 1886. 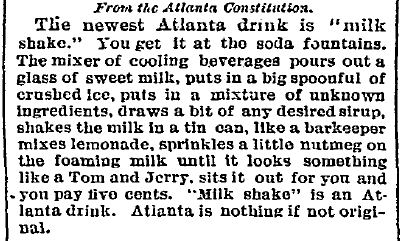 So what was this “Milk Shake”? It was a simple drink with substantial effort. The ingredients were whole milk, a flavouring syrup like vanilla or strawberry and a grating of nutmeg on top. Yes, that is just flavoured milk, but if you give it a vigorous shake for 2 to 3 minutes, you will end up with a light frothy beverage that was interesting and unique. If you are familiar with a properly made Ramos Gin Fizz, then you will understand that the airiness of the drink is what makes the drink novel. As for the mystery ingredients, they were probably some additional flavouring or a foaming agent like soap bark solution which helped stabilize the foam.

The milkshake may have even started the drive-through craze:

The Atchison Daily Globe (Atchison, Kansas), Monday, April 23, 1888
People out driving, and who drive up to Stoll’s drug store, will be accommodated without getting out of their carriages with his delicious cream soda, milk shake, or any other article they may want.

This drink requires effort, but the result is unlike any other drink. It is light but flavourful and similar to whipped cream but not as rich and far more drinkable. It is a low calorie milkshake.

The most popular flavour at the soda fountain in the 1880s and 90s was a mixture of vanilla and pineapple flavours.


Amount Per Serving: Calories: 115
If you wanted a serious calorie count in your shake, the Cream Shake was an option with one half of the milk being replaced by cream.

If you’ve ever asked “How do you make a milkshake without ice cream?” the original method is the way to do it and not only does it have fewer calories, the two minutes of continuous shaking is a great way to burn calories. All that vigorous shaking led to the invention of milkshake machines, though not the blender we think of today, they were mechanical shakers like the video below.

These machines were thought to be mechanical cocktail shakers but are in fact purposely built milkshake machines for soda fountains. Shaking a cocktail is done just to chill a drink, and that takes 15 seconds, the first iteration of the milkshake required 2 to 3 minutes of vigorous shaking and these mechanical shakers could do it better than the local soda jerk. There is even a patent (Machine for mixing beverages) that describes the inventions use for milkshakes.

“Our invention relates to improvements in machines for mixing beverages such as milkshakes, shaker lemonades, mint juleps, etc. and it consists in certain novel features hereinafter described and claimed.”

As for flavours, the most popular choices were chocolate, vanilla, pineapple and coffee, but strawberry, ginger, banana and peach we common as well. Any syrup that was used to make a soda could be used to flavour a milkshake.

The influence of the soda fountain on cocktails can be seen with the original version of the milk shake. It no doubt influenced the Ramos Gin Fizz and other frothy drinks like the Peach Blow as well as the starting point for the modern trend of “foams” applied to cocktails.

If you look at Internet-based historical references to this drink you would think they started as whisky drinks or the electric blender was the start, but that is not the case. Milk as a drink, or in a drink, is universal and the only thing original about a milkshake in 1886 was that they shook it so long that is became light and airy.

The milkshakes we enjoy today developed from the ice cream desserts (Sundae’s, Splits, etc.) that soda fountains started serving in the early 1900s with the advent of modern refrigeration. In the Dispenser’s Formulary (1915), the start of the chapter on ice cream states:

“What has been jocularly called “the solidification of the soda fountain business” is one of the most significant developments in recent years.”

The carbonated beverages element split into prepackaged bottles and cans, and the soda fountain evolved into ice cream shops and bars.

Shaking a drink for two minutes isn’t practical in the modern age of laziness. And the blades of a blender do not work nearly as well as shaking by hand. This milkshake has a silky smooth texture that is light and flavourful. It is unique, and everyone should try one at some point.

1. Shake.—Any syrup or combination of syrups may be used, sometimes with the addition of solution of acid phosphate. Shaved ice is added with a little plain water. It is then shaken and strained and the glass filled with carbonated water. The shaking can be done by hand with a shaker or by machine.

a. Milk Shake.—The milk shake is made without carbonated water by the shaking together of syrup and rich milk, either with or without crushed ice and then serving after straining.
b. Ice Cream Shake.—An ice cream shake is made in a similar manner, the ice cream being added before shaking.
c. Egg Shake.—When an egg is added to a milk shake prior to the shaking it becomes an egg shake. Acid flavors should never be used in any of these as they curdle the milk.

3. Creme.—A syrupy liqueur, the principal flavor being usually specified, as creme de menthe, creme de rose, creme yvette, etc. As a fountain beverage the cream is related to the cream sodas, being very sweet and made with syrups of distinctive flavour, cream or milk, and topped with whipped cream.

4. Ice Cream Soda.—A measured quantity of ice cream added to the mixture of syrup and carbonated water. The best fountains use chocolate milk, vanilla and strawberry ice cream with syrups of the same flavor. In some fountains, milk or cream is also added to the beverage, which is served with a spoon.

5. Float.—An ade upon the top of which is floated a layer of grape juice, ginger ale, or in some cases, a disher if fruit sherbert or ice cream. In the latter case it would be known as a “sherbert float” or an “ice-cream float.”

Put 4 ounces, or less, or shaved ice into a thick 12-ounce tumbler, add 1 ounce vanilla syrup, fill the whole glass with milk and agitate the whole thoroughly. The shaking may be done in the special machine known as a “milk shaker,” or by means of a small hand shaker like that used for making egg drinks. After shaking, strain into another glass and serve. Sprinkle on some powdered nutmeg, if desired. Chocolate or any other non-acidulous syrup may be used if desired (acid syrups tend to curdle the milk). Price—12 ounces, 10 cents. —from the Dispensers Formulary (1915)