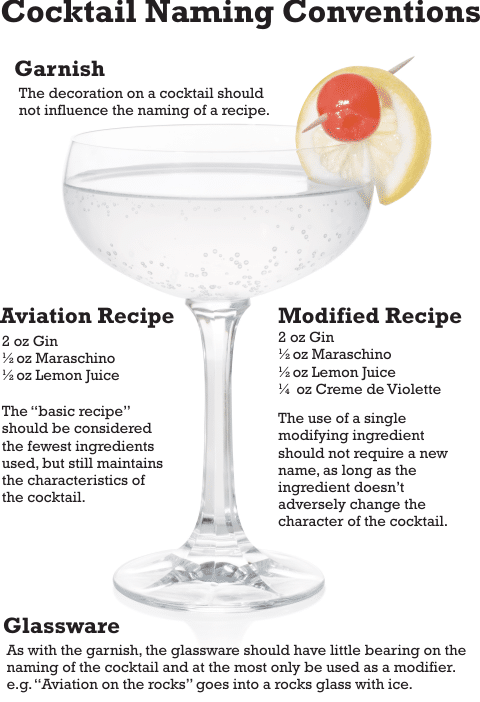 As bartenders and mixologists toil away behind their bars, they occasionally create inspiring cocktails that they want to share with the masses. After creation, the first thing that needs to be done is to provide the mixture with an etymological designation (i.e. create a drink name). If the drink is truly unique, then picking a name is a trivial matter. If the drink is a variation on an existing cocktail, then it gets a little tricky. PR people have done a pretty good job at mangling the hierarchy of cocktail names, and it is something we need to avoid. Vodka Mojito with Triple Sec anyone?

Names are important, they help to avoid confusion. Cocktail names are especially important to bartenders because it is often the only information they get to craft a drink.

Most bartenders can handle this request with ease because this cocktail is historically well defined. This doesn’t mean that all parts of the recipe will be executed exactly the same, but the end drink will at the very least contain whisky and sweet vermouth. Better bartenders will add the bitters and most likely use better ingredients, but either way, the end result will have the characteristics of a Manhattan.

Some drinks are in the midst of an identity crisis, for example, the Martini, Mojito and Margarita. Originally, each one of these was a unique drink. Today, they are considered drink categories. Think Mango Margarita, Apple Mojito and the Tutti-Frutti Martini. Even though these have modified names, the original drink gets blurred. Most people who order a Daiquiri now expect it to be strawberry flavoured and slushy.

The absolute worst part for bartenders is when someone comes in and orders a cocktail and then says “this isn’t what I ordered”. At one restaurant I worked at, I put the classic Singapore Sling recipe on the menu. The majority of people loved it, but I’d get the occasional complaint because it wasn’t the gin, orange juice and grenadine variation. I actually had a girl sitting at the bar, with three friends, “dress me down” and explain that “she was a bartender” and “that drink wasn’t a Singapore Sling”. Fun times, luckily the other three girls thought it was great.

Humans are inherently lazy, and that’s why we have things like cars because we can’t be bothered to walk. The plus side to this is we use our creative skills to make life easy. Want to solve an efficiency problem? Hire some functional procrastinators, they can get anything done 30 minutes before a deadline. My point is that people craft cocktails and then just haphazardly slap a name on it because we’re lazy.

There is another factor. Appending a known name like Mojito or Martini onto a new creation lowers a consumer’s barrier to acceptance. The Unicum Margarita and Malort Daiquiri sound inviting to the oblivious, but customer satisfaction would be abysmal.

As usual, I have some ideas that I’m going to put forward to start some discussion and possibly help some people understand why good cocktail names matter.

If you are modifying an existing cocktail, the end result should have the same characteristics as the original cocktail. Don’t create confusion by taking an existing name and applying it to a different recipe.

If you have created something uniquely different, even though it was based on an existing recipe, at the very least append a modifier to the name.

Rule #3 – Some Things Matter, Some Don’t

Garnish, glassware and brands are inconsequential to the final name. Changing the garnish or serving a drink in a different glass does not require a new name. Even though many companies will try to slap their brand onto a drink, it is best to avoid that because it can cause legal headaches.

If you’ve created something that is truly unique, even though it was based on another drink, give it a new name.

Example: In the Aviation cocktail, Creme de Violette is optional, but either version can still be characteristically described as an Aviation. If you were to add a slug of Fernet Branca, there is no way one could call this modified drink an Aviation. Give it a new name, like the Spruce Goose.

If possible, it is always kind to give credit to an influential cocktail. One method is to modify the name in a creative way. Let’s take Jamie Boudreau’s Pax Sax Sarax cocktail as an example.

Modifying the cocktail with a different scotch, or even another type of whisky, wouldn’t constitute a new cocktail. Different bitters? Nope. But if we added a splash of Red Bull we’d need to rename it. And to maintain a link to the original we could call it the Pax Sax Chillax.

If you really want to get into connecting names, talk to racehorse owners. The lineage for the horse Seabiscuit (yes the movie horse) is as follows, see if you can figure it out.

There are some cocktails that already do this, like the Alexander(s) and Tony Abou Ganim’s Cable Car, which is related to the Sidecar.

When naming a cocktail the general idea is to give it a unique identifier that helps promote it. Unique cocktail names, like the Wet Grave, can harken back to a time when cocktail names were rather ghoulish (Tombstone, Corpse Reviver, etc.) and drinking habits reflected the names. Other times, the name of a drink needs to reflect the inspiration, such as older cocktail that it was based on. Then there are the times that truly unique creations should get an equally unique name.

Following some of these guidelines can help sort out the growing mess of cocktail names that already abound. And really, if there ever was a cocktail that was suffering an identity crisis it is the Vodka Mojito with triple sec. Also, see Gaz Regan’s post on Recipe Etiquette.