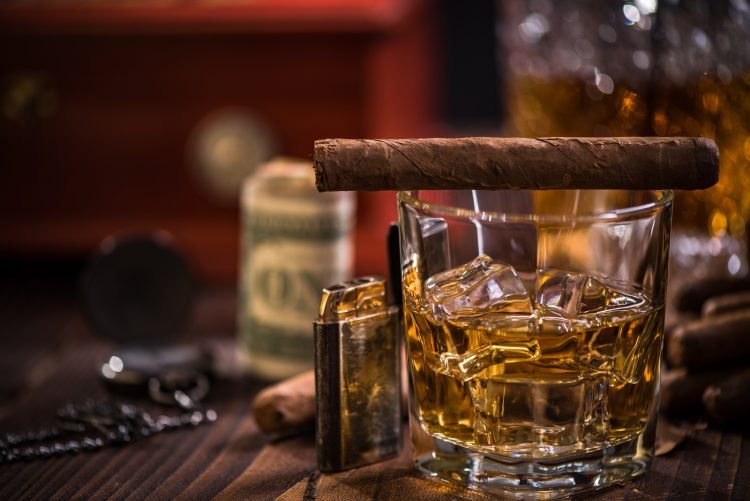 For some reason, bartenders are drawn to the idea of infusing spirits with cigar tobacco. After my post on the Bar Sorcerer, where I made a statement that “tobacco infusions are a bad idea” I’ve had a number of people ask why? The simple answer is toxicity, but that answer doesn’t provide the details intelligent bartenders are looking for, so in this post, I’ve expanded on the question. If you are thinking about doing a tobacco infusion, this is a must-read post. If you go to bars where a tobacco-infused cocktail might show up on the menu, this is a must-read post.

Having worked in labs for a good part of my life (15 years), I’ve been subjected to enough safety training and accident reviews to have a healthy respect for the dangers that lurk below seemingly innocuous things.

A couple of days a week I work in a histology lab where I spend my time preparing tissue samples for researchers. One of the pieces of equipment we use is a microtome, which cuts sections of tissue as fine as 3 microns. For perspective, a human hair is roughly 100 microns. The trick to cutting things so fine is to use a really sharp blade. Now, no matter how many times we tell people to use extreme caution when cutting, there are always a few nasty cuts. It takes almost no pressure for the blade to slice through flesh resulting in blood, stitches and a lot of paperwork.

To date, I have not cut myself, but there have been a few close calls. Please don’t tell me to knock on wood. The reason I’ve avoided carving up my digits is that I’m keenly aware of the dangers. I’m almost robotic in my use of the safety devices and my reactions when something goes wrong.

So what does this have to do with infusing spirits with tobacco? Well, it just demonstrates that no matter what position you are in, you must be aware of the dangers and take precautions. In the case of tobacco infusions, the nicotine in tobacco is extremely toxic. To compare, here are some numbers for other well know toxins:

You are reading that correct, nicotine is as toxic as hydrogen cyanide (HCN). Considering HCN was used for chemical warfare purposes and suicide pills, the fact that nicotine is equally as toxic should give a person pause before incorporating it into a drink. Also, even if you don’t hit the toxic levels, there are still serious side-effects with lower doses.

Let’s do some math to understand where a tobacco-infused spirit can go wrong.

A single cigarette contains 10 to 20 mg of nicotine, but a smoker only gets a fraction of that amount, typically 2 to 3 mg of nicotine with the other portion being burned away or not inhaled, but still a buzz-worthy dose. In a liquid extraction/infusion process the yield of nicotine will be much higher.

Let’s say you take 5 grams of tobacco, with 15 mg of nicotine per gram, and infuse that into 250 ml of vodka. That means that every 30 ml (one ounce) of infused vodka will have roughly 9 mg of nicotine. Even though it’s not at the toxic level, if someone were to do a shot, they’d get a seriously objectionable rush. A few rounds of cocktails made with this infusion would lead to bad results.

The second problem is that non-smokers have no tolerance for nicotine. I don’t smoke, but I know many people that do and they always talk about the rush they had when they started smoking, many of them said they felt ill after their first cigarette. Let’s say that’s only 2 mg of nicotine if a non-smoker sucked back a cocktail with 3 or 4 mg of nicotine it would probably be a very unpleasant experience.

Then, of course, there is the compounded hangover of nicotine and alcohol withdrawal. Probably not fun.

I trust bartenders to make Manhattans and Margaritas, and many times they can’t even get those simple recipes right. Knowing that, would you trust them enough to dose your cocktail with hydrogen cyanide? How about the equally toxic nicotine? Unlike other things, I find that nicotine is a bit too toxic to work with safely and I’m apprehensive at the thought of drinking tobacco infused cocktails. Even if they aren’t lethal, there are still the unpleasant side-effects I can live without.

As for the concept of cold-smoking a spirit (i.e. infusing the smoke into the spirit), this is a safer approach since the nicotine levels will be lower. I have tried a sample of this before and the end result can be quite harsh. The flavour was reminiscent of a cigarette butt in a beer bottle. Yes, back before smoking was banned in bars, I was unfortunate enough to take a swig of a bottle of beer that someone used as an ashtray. You can’t forget that flavour, ever. It makes me wonder why people would even want to drink a Nicotini. Smoke your cigar, drink your cocktail, that is the way to do it.

Update: After posting this article, the “user experiences” have been rolling in and it seems that a number of people have learned the hard way. If you operate a bar or work in at one, you definitely need to consider liability issues if you are serving tobacco infused cocktails.