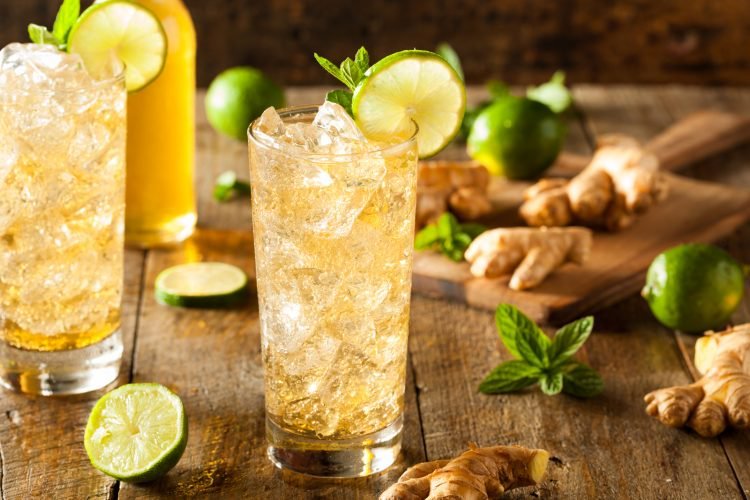 Walk into any bar in Canada and order a “rye and ginger” and the bartender, without even blinking, will have one on the bar lickity-split. In parts of the US, it would be a “Whiskey & Ginger Ale”. The term “rye”, in Canada, simply means any Canadian Whisky, more on the confusion later. The familiarity with the “rye and ginger” order even flows into many of the US states. If you put the politics aside for a moment, we should realize that whisky and ginger ale is a great combination, possibly even better than the, dare I say, Dark ’n Stormy.

Many drinks have their place, a Manhattan for a sophisticated evening and a Pina Colada for a winter vacation in the Caribbean. The rye and ginger is a casual, easy going, drink. If you don’t feel like a proper cocktail, beer or wine, this is the drink that seems to work. It’s not too sweet, the alcohol isn’t “in your face”, the flavours work well together and the carbonation seems to lighten everything up.

The ingredients used will always make a difference. Ginger Ale is the choice here, not ginger beer like a Dark and Stormy. The whisky will just get overpowered by a strong ginger beer. The number of companies making ginger ale is much better than the cola world, so you do have some options, like Blenheim, Vernors, Reed’s and Boyland. Almost any whisky will play nice with ginger ale, even Scotch. Many people prefer a milder whisky, like Canadian or Irish, but an easy going Speyside isn’t out of the question.

A straight rye whisky is an option. Alas, for all of the rye fans, there is one caveat; you probably are not getting 100% rye, you may not even be getting 10% rye whisky when you order a “Rye and Ginger” in Canada or some US States. “What?” you say “there must be some law, like scotch or bourbon, stating rye must be rye”. The US has a law, but oddly, and even sadly, there is a trade agreement between the European Community and Canada that specifically states that only whiskies originating in Canada can be labelled “rye whisky”. “But what about 100% rye whiskies from the US, like Old Overholt and Sazerac?” you say. Well, I’m not really sure how that will work out.

Now before my American friends start writing their Congressman, about starting another tariff war with Canada, I’m not in agreement with this trade document. Now to all the Canadians who are going to line up in front of my house, ring my doorbell in an orderly fashion, apologize for disturbing me, politely disagree with me, after which you’ll apologize for being disagreeable, and then chat about the weather for a minute, shake hands and then be off; I think Canadian whisky is a fine thing, but it’s not a true rye whisky. (There are exceptions)

The “rye and ginger” phrase is just something that happened. At one point in time, most Canadian whiskies did have a lot of rye in them. During prohibition, Canadian distilleries ramped up their production, for their thirsty clientele, south of the 49th parallel, and started using corn. Americans in the 1920’s didn’t seem to care if it was rye, corn, or something out of a bathtub, as long as they got a good stiff drink. The name “rye” stuck and nobody realized we were supposed to change it to a “corn and ginger” or “a mash of corn, barley, rye and ginger”. “Whisky and ginger,” you say, but “rye and ginger” just rolls off your tongue so much easier, and especially if you are a “few” into the night.

Add a portion of ginger ale to the glass and then the whisky, mixes the drink better without loosing the carbonation.


Amount Per Serving: Calories: 120
The Rye and Ginger isn’t the most complex drink in the world, but it is an enjoyable one. A bartender rarely ever screws it up, you can modify it with a “call brand” and it is balanced. Even though I used Sazerac for this drink, just to ensure I meet the international cocktail unions definition of rye, I still prefer a good Canadian whisky in this drink. “To each his own”, and when you are sitting on a patio thinking about a drink, a rye and ginger just might be the trick.

This months Mixology Monday brought to you by the fine dude at Rumdood.